Resistant Hypercalcemia mainly occurs in diseased states with severely elevated serum calcium levels. It is predominantly reported in Malignancy-associated hypercalcemia and primary hyperparathyroidism and can sometimes be life-threatening. Early recognition and prompt diagnosis are essential to decrease mortality associated with this condition. This activity reviews the evaluation and management of resistant hypercalcemia and highlights the role of the healthcare team in managing patients with this condition.

Hypercalcemia can be grouped based on serum calcium levels as follows:

Resistant hypercalcemia can be defined as persistently elevated calcium levels despite multiple therapy modalities or if re-administration is required within two weeks of initial therapy.[4]

Hypercalcemia due to endocrine disorders can be divided into two categories.

The first category includes endocrine disorders with the overproduction of parathyroid hormones (PTH) such as:

The second category includes endocrine disorders without overproduction of parathyroid hormones such as:

Pediatric syndromes such as Idiopathic infantile hypercalcemia and Williams syndrome are also etiologies of hypercalcemia. Immobilization occurs mainly in children or adults with restricted mobility due to spinal injury or other debilitating disorders. There is increased osteoclastic bone resorption, leading to elevated serum calcium levels.

Various hormonal systems regulate calcium absorption and metabolism.[7] The most common players involved in the direct or indirect regulation of serum calcium are PTH and Vitamin D.[8] Serum calcium levels rise due to the three main processes, elevated intestinal calcium absorption, increased calcium mobilization from bone, and amplified calcium absorption from the kidneys. Hypercalcemia often results from increased release of calcium from the bone by the activation of RANK (Receptor activator of nuclear factor-kappa B) receptors by RANK-Ligand (RANK-L), which are located on the surface of the osteoclasts.[9]

It is essential to approach hypercalcemia history and physical examination by focusing on the signs and symptoms relevant to the disease and the underlying causative disorder. Symptoms can easily be remembered by using the mnemonic: bone (refers to bone pain, pathological fractures), groans (gastrointestinal symptoms including nausea, vomiting), stones (often kidney stones), moans (malaise, generalized weakness/ fatigue), and psychiatric overtones (i.e., confusion, depression).

Further evaluation should include a thorough medication list to review, and medications implicated in raising calcium levels should be discontinued. These can be restarted later if they are confirmed not to be the etiology for hypercalcemia. Diagnosis of hypercalcemia in Neonates and infants who are also found to have dysmorphic features warrants quick evaluation for Williams or Murk Jansen syndrome.[14]

EKG features of hypercalcemia often include PR interval and QRS prolongation, ST elevation, T wave inversion, and a J wave. It is crucial to perform imaging studies to evaluate for possible malignancies. Surgical exploration of the neck should be performed in all resistant hypercalcemia cases, especially when other localizing investigations have proven futile and the etiology remains uncertain.

Hypercalcemia of malignancy is usually associated with severely elevated calcium levels and often presents as an oncologic emergency.[7] In cases of hypercalcemia with serum calcium less than 12 mg/dL (3 mM), management should be targeted towards the underlying condition, while severe or resistant hypercalcemia requires aggressive treatment.

Adequate hydration and fluid resuscitation are essential in every patient presenting with severe hypercalcemia. Due to diabetes insipidus induced by hypercalcemia, extracellular volume loss requires judicious fluid resuscitation with about 3 to 4 L of 0.9% sodium chloride within 48 hours. Hydration improves urinary calcium excretion and decreases tubular reabsorption of sodium and calcium.[16] The patient's cardiac and renal function should always be considered when initiating therapy. After adequate rehydration, a loop diuretic, such as furosemide 10 to 20 mg, can be administered intravenously to induce renal calcium excretion in cases of PTH or PTHrP induced hypercalcemia.[8] Strict intake and output should be monitored.

Antiresorptive agents have proven to be effective in the management of resistant hypercalcemia. Severe hypercalcemia occurs from the increased mobilization of calcium from bone, regardless of the etiology. Bisphosphonates act to prevent osteoclastic action directly. Intravenous (IV) administration of zoledronic acid, 4 mg/5 ml, over 15 min or IV pamidronate, 90 mg in 500 ml/0.9% saline or 5% dextrose in water administered (D5W) over 4 hours.[17]

Renal function should be closely monitored during therapy. Another significant side effect of bisphosphonates is osteonecrosis of the jaw. Calcitonin is used for its rapid onset of action and safety in acute settings.[18] It works by inhibiting osteoclastic resorption and enhancing calcium elimination.[19] It can be administered at 4 to 8 IU/Kg intramuscularly (IM) or subcutaneously every 6 to 12 hours. Its effect peaks in about 2 to 6 hours. It can be used in combination with bisphosphonates or denosumab in cases of severe hypercalcemia. Rapid desensitization to increasing doses of the medication can occur after 24 to 48 hours. Denosumab is a monoclonal antibody to RANKL that decreases osteoclast action and bone resorption.[20] It is highly effective in hypercalcemia refractory to bisphosphonates.[21] The typical dose used is 120 mg subcutaneous injection, and the dose should not be repeated earlier than one week after initial administration.[22] This medication is not cleared by the kidney and can be used in patients with chronic kidney disease.

Gallium nitrate is used for the management of MHCM. It reduces osteoclast activity and bone remodeling.[23] It is very efficacious in decreasing calcium levels. However, it should be avoided in patients with renal failure as it can worsen renal function. Adequate fluid resuscitation and monitoring of electrolytes are essential before and during therapy.

Hydrocortisone 200 to 300 mg IV with the duration of 3 to 5 days may be administered for resistant hypercalcemia often related to hematologic malignancies such as lymphoma, myeloma, or in cases of vitamin D intoxication and granulomatous diseases.[24][25] Hemodialysis is reserved for critically elevated calcium levels resistant to other therapies such as those listed above and patients with renal disease.[26]

Calcimimetics such as cinacalcet can be used for emergent treatment of severely elevated calcium levels. Cinacalcet acts on the calcium-sensing receptors, hence decreasing PTH secretion.[27] The initial dose of 30 mg twice daily, with a maximum dose of 90 mg 3 times daily, can be used in cases of hypercalcemia secondary to severe primary hyperparathyroidism, especially those caused by parathyroid carcinoma.[3] In a hypercalcemic crisis or resistant hypercalcemia, an urgent parathyroidectomy is potentially curative.[28] Elective parathyroidectomy is often done for parathyroid adenomas.

Criteria for surgery in primary hyperparathyroidism:[29]

The following abnormalities can present with symptoms similar to hypercalcemia manifestations:[30]

The prognosis of hypercalcemia mostly depends on the cause. Hypercalcemia caused by a benign disorder often has a good prognosis. Hyperparathyroidism-induced hypercalcemia is often less severe and of prolonged course and related to resultant bone disease.  Cases of mild hypercalcemia rarely lead to death if appropriately treated. Cancer-related hypercalcemia often occurs in the later stages of the disease and poses a bleak prognosis with multiple ER visits and frequent hospitalizations.[31]

Hypercalcemia often leads to death in patients with ectopic PTHrP production. These patients rarely survive more than a few weeks or months. Osteolytic metastases tend to cause death from nerve compression and other orthopedic complications.[32][33]

Complications of Hypercalcemia can be related to the disease process itself or due to side effects of therapies. Severely elevated hypercalcemia is an endocrine emergency is a neurological emergency and requires prompt management to avoid serious complications, which include severe volume contraction, cardiac and neurological consequences.[34] Complications from untreated hypercalcemia include induction of abnormal heart rhythms. The electrocardiogram often shows T wave flattening, mild prolongation of QRS and PR intervals, presence of Q-wave.

Chronically high serum calcium can precipitate to form crystals and eventually form calcium stones in the kidneys. Hypercalcemia inhibits renal autoregulation, induces diabetes insipidus, and causes increased serum osmolality and other metabolic disturbances leading to prerenal kidney injury with decreased glomerular filtration and renal excretion capacity. Osteoporosis occurs as a result of hypercalcemia bone resorption. In the case of persistent osteoclastic activity, thinning of the bones develops, complicated with fractures and loss of height. Severe hypercalcemia can result in delirium, confusion, dementia, and coma, which is often fatal.

Patient education becomes paramount regarding the etiology of their disease, especially those with malignancy-related hypercalcemia. An interdisciplinary team involving Oncology, Nephrology, Endocrinology is often required to ensure adequate and well-coordinated care. Patients should be made aware of the mortality associated with severe hypercalcemia. Also, all available treatment options, including hemodialysis or parathyroidectomy, should be discussed, especially in cases of persistent/ resistant hypercalcemia.

Resistant hypercalcemia is associated with persistent severely elevated calcium levels, leading to morbid complications, including death if not promptly and properly managed.  The pattern of multiple ER visits due to symptomatic hypercalcemia should prompt care providers to evaluate possible causes of persistent hypercalcemia further.  Management should focus on rapid reduction of serum calcium levels through calciuresis, decreased intestinal absorption of calcium, and reduced bone resorption. The mainstays of therapy include volume resuscitation, bisphosphonates, and calcitonin. However, despite preliminary therapy, denosumab has been proven to be an excellent choice of therapy in resistant hypercalcemia cases. Patients who do not respond to this therapy would require hemodialysis and, ultimately, surgical intervention in select patients.

The importance of the interprofessional approach cannot be under-emphasized. Early identification of symptomatic hypercalcemia by the emergency medicine physician is essential to initiate immediate hydration. The nephrology and hemodialysis team played a vital role in resistant hypercalcemia, requiring hemodialysis to normalize calcium levels.  The endocrinologists will primarily coordinate the patient's care and determine treatment strategies. They will also decide which patients would benefit from denosumab versus other modes of therapy or when surgery becomes appropriate.  Surgeons become significant members of the treatment team, mainly in parathyroid cancers and some other malignancy-related hypercalcemia, in which surgery becomes the last resort to normalize calcium levels. Nurses play significant roles in critical care and close monitoring of patient vitals and hemodynamics. Pharmacists can verify dosing, check for interactions, and consult with clinicians regarding adverse effects. These examples of interprofessional interplay show how this approach will drive better patient results in hypercalcemia cases. [Level 5] 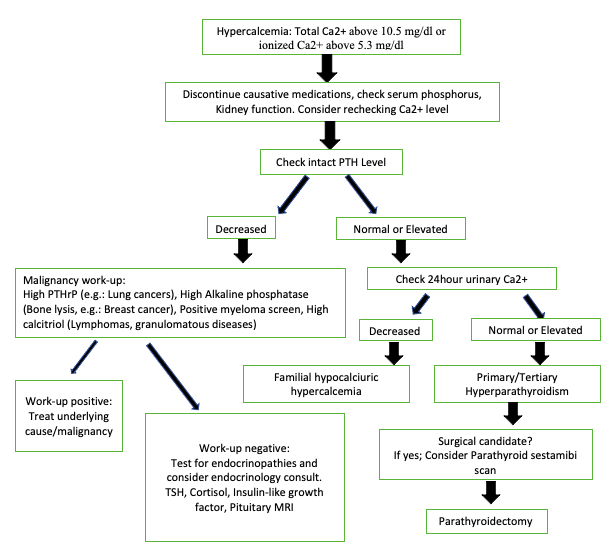 McMahan J,Linneman T, A case of resistant hypercalcemia of malignancy with a proposed treatment algorithm. The Annals of pharmacotherapy. 2009 Sep;     [PubMed PMID: 19622757]

Cardella CJ,Birkin BL,Rapoport A, Role of dialysis in the treatment of severe hypercalcemia: report of two cases successfully treated with hemodialysis and review of the literature. Clinical nephrology. 1979 Dec;     [PubMed PMID: 160852]