Parahiatal hernia is a rare type of diaphragmatic hernia. Its rarity could either be due to one or a combination of the following three factors; confusion about the anatomy, similarity in clinical presentation with paraesophageal hernias, and not frequently reported in the literature. These hernias are associated with increased morbidity and mortality if not identified and managed appropriately. This activity reviews the anatomy of parahiatal hernia, compares it with other diaphragmatic hernias, and highlights the importance of different approaches to its management to improve the care of patients.

Parahiatal hernia (PHH) is a rare type of diaphragmatic hernia (DH), which is an abnormal protrusion of the viscera through an abnormal diaphragmatic defect between the left part of the right crus and the left crus. The diaphragm is a vital muscle for breathing, derived from the septum transversum (anterior portion), pleuroperitoneal folds (posterolateral part), and dorsal mesentery (posteromedial part). This anatomical barrier between the two cavities has normal openings for various structures to pass through. The hiatal opening at the 10th thoracic vertebral level allows the esophagus to pass through its right crus to form a gastroesophageal junction (GOJ). A PHH defect would occur to its left side. Due to the proximity, PHH always gets confused with a hiatus hernia.[1] (see Image 1)

The majority of diaphragmatic hernias are hiatal defect. The most prevalent of them are the sliding type, due to cephalad migration of GOJ (Type I), less frequent variant is paraesophageal in nature due to rolling of the stomach may be without any migration of GOJ (Type II) or with the migration of GOJ (Type III) and in the worst case, it is associated with herniation of other abdominal viscera along with stomach (Type IV).[2] The distinctive feature of the hiatal hernia is an abnormal protrusion of the viscera through a normal opening (Oesophageal hiatus) in contrast to PHH. In general, the stomach is the only herniated content, but other contents can be found, including transverse colon, omentum, small bowel, and the spleen.

PHH is not well-described in the literature, but like any other DH, they can be congenital or acquired. The two most common Congenital defects are Bochdalek hernia, a posterolateral defect (due to failure of pleuroperitoneal folds and persistent pneumoenteric recess), and Morgagni hernia, an anteromedial defect  (due to failure of septum transversum), both mostly occur on the left side. The acquired defects are secondary to trauma, post esophageal surgery, or due to progressive weakness within the muscles.[3][4][5]

Based on established embryological evidence in the literature regarding diaphragmatic hernias, it can only be concluded that congenital PHH is a posteromedial defect (due to failure in the development of dorsal mesentery) within the diaphragm.

Most of the PHH cases were found incidentally and presented in the literature as case reports therefore, the exact incidence of parahiatal hernia is difficult to obtain. The incidence of PHH is estimated between 0.2% and 0.35%.[6] More commonly noted in the older group of people with no gender prevalence.[7][8]

Besides congenital weakness, acquired PHH can also occur de novo in absence of any trauma or surgery due to progressive muscle weakness with age, and further contributing factors are:

PHH may mimic other DH in clinical presentation. The clinical presentation in parahiatal hernias is often difficult to be distinguished from the more common para esophageal pathology. Characteristically these patients do not share gastroesophageal reflux disease symptoms unless hiatal hernia coexists, making it crucial to identify them separately due to their implication on the choice of repair and overall patient outcome. They are either an incidental finding as part of other workup or at the time of hiatal hernia repair. In literature mostly there are case reports of urgent presentation with either incarceration or volvulus.

Although a typical presentation is with epigastric discomfort, nausea, vomiting, chest pain, especially after meals (mimicking angina), early satiety, and in worse cases could develop respiratory symptoms. The patient can be anemic (due to gastric erosions at the neck of hernia), with some mild discomfort in the epigastric region and reduce air entry over the left lower chest.[9]

Chest X-ray can be helpful in cases of large PHH. Depending on its contents, the air-fluid level is pathognomonic to DH, and gaseous small or large bowel loops could be noticed.

Esophagogastroscopy on J-manoeuvre will show two openings, the normal oesophageal hiatus (thorough with the scope will be passing through) and laterally PHH opening, with an intervening band of tissue that differentiates it from its contemporary hiatal hernia (see Image 2). Sometimes it can be diagnosed as gastric diverticulum because of a similar endoscopic appearance.

A contrast swallow study would give evidence for any other concomitant oesophageal disorders (such as achalasia, gastroesophageal reflux disease) and confirm the presence of a diaphragmatic hernia but is not diagnostic for PHH.

Manometry and pH studies are recommended as a part of the routine workup for reflux disease to have an objective assessment through esophageal manometry and the De Meester score, respectively, to quantify the symptoms, which will imply the choice of surgical repair one could offer. Whereas in emergency cases, a decision has to be made based on the patient’s history and operative findings at the time of surgery.[10]

Computed tomography (CT) scan of the chest and upper abdomen with 3-D reconstruction views is the preferred choice of investigation due to its ability to reveal and help us to understand the anatomy of the DH accurately. One would expect to see the left part of the right crus lateral to the esophagus, PHH would be identified lateral to this part of the right crus as its right border, and it is the identification of this band of tissue, which is the key to its diagnosis.[11] (see Images 3 and 4)

Conservative: Given the dormant nature of the PHH, it mainly presents late as an emergency with complication, or when they are very large (at high risk of developing gastric volvulus), there is no published evidence for conservative management.

Operative: Laparoscopic approach is recommended for all large and symptomatic cases. The repair aims to achieve a complete reduction of the hernia content along with excision of the sac. Once the boundaries of parahiatal defect are clearly identified, which could only be achieved if the oesophageal hiatus is fully dissected, the left part of the right crus and left crus is approximated tension-free interrupted non-absorbable stitches (see Video Part 1).

If the tissue quality is poor or the defect is large enough, reinforcement techniques should be considered. With mesh, our preferred choice is an absorbable bio-mesh. In the presence of reflux symptoms or when the whole GOJ is disentangled, an anti-reflux procedure may be necessary.[6][12]

Partial Toupet fundoplication is our preferred and standard practice, but it is dependent on the surgeon’s preference and expertise. (see Video Part 2)

It is difficult to comment about the overall prognosis as the true incidence is unknown due to unawareness and a handful of reported cases in the literature.[8] Based on published studies, PHH has a favorable prognosis if treated in a timely fashion and no significant morbidity and mortality postoperatively. Only one study has reported a recurrence of a case out of eight patients.[6]

PPH frequently comes to medical attention when symptomatic and usually large, which carries an increased risk of gastric volvulus and incarceration, which could result in ischemia and bowel obstruction depending on the contents of the hernia. Early diagnosis is important to prevent the strangulation and necrosis of the gastric fundus that may occur if it remains unrecognized.[14]

Damage to pleura causing pneumomediastinum is not uncommon after any esophageal surgery and usually resolves within 24 hours without any sequelae. Tension pneumothorax is rare (1 to 2%), major bleeding has been noticed in 2% of cases, gastric and oesophageal injuries are uncommon (1%). The dead space created within the thoracic cavity following excision of sac will be re-occupied by the lungs over a period of time but can present with fluid collection (seroma), which can get infected; it is more likely if the sac is not excised fully. In the absence of any infection, these collections can be observed without any intervention; otherwise, it would merit interventional radiology-guided drainage and appropriate antibiotics.[15]

PHH postoperative care is based on principles of an enhanced recovery program. The patients are mobilized early, resuming oral fluid intake in the immediate postoperative period, and appropriate analgesia. The soft diet will be commenced early if no anti-reflux procedure has been performed; otherwise, the diet will be gradually increased over the next two weeks.

PHH does not necessarily need an anti-reflux procedure as a part of repair unless there is a concomitant gastroesophageal reflux disease or a hiatal hernia.

A high index of suspicion is needed for the high-risk group patients, once life-threatening emergencies are excluded, the possibility of DH should be considered.

Given the confusion around the diagnosis and rarity of the disease, PHH should be treated at specialist centers, as it requires a skilled and dedicated interprofessional team of radiologists, surgeons, and nursing staff to achieve the best outcome in these cases. [Level 5] 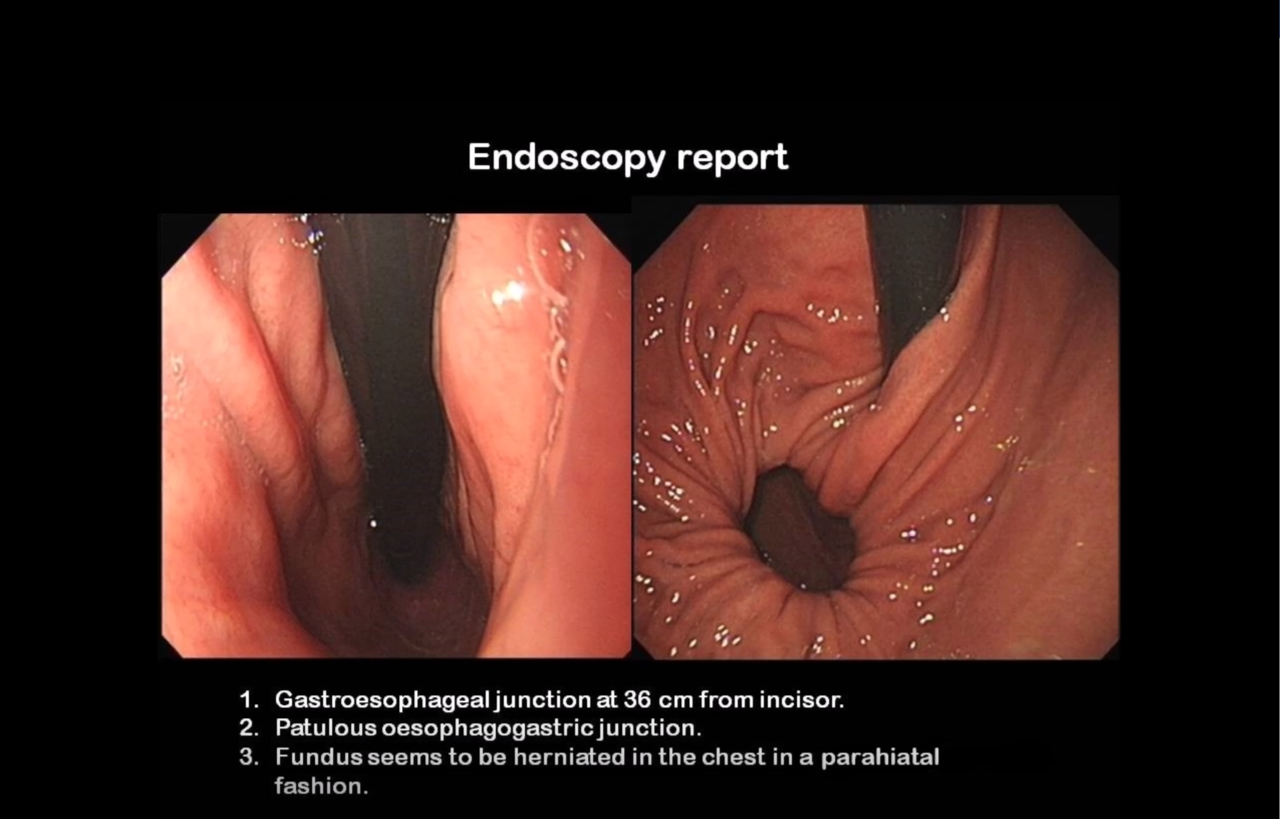 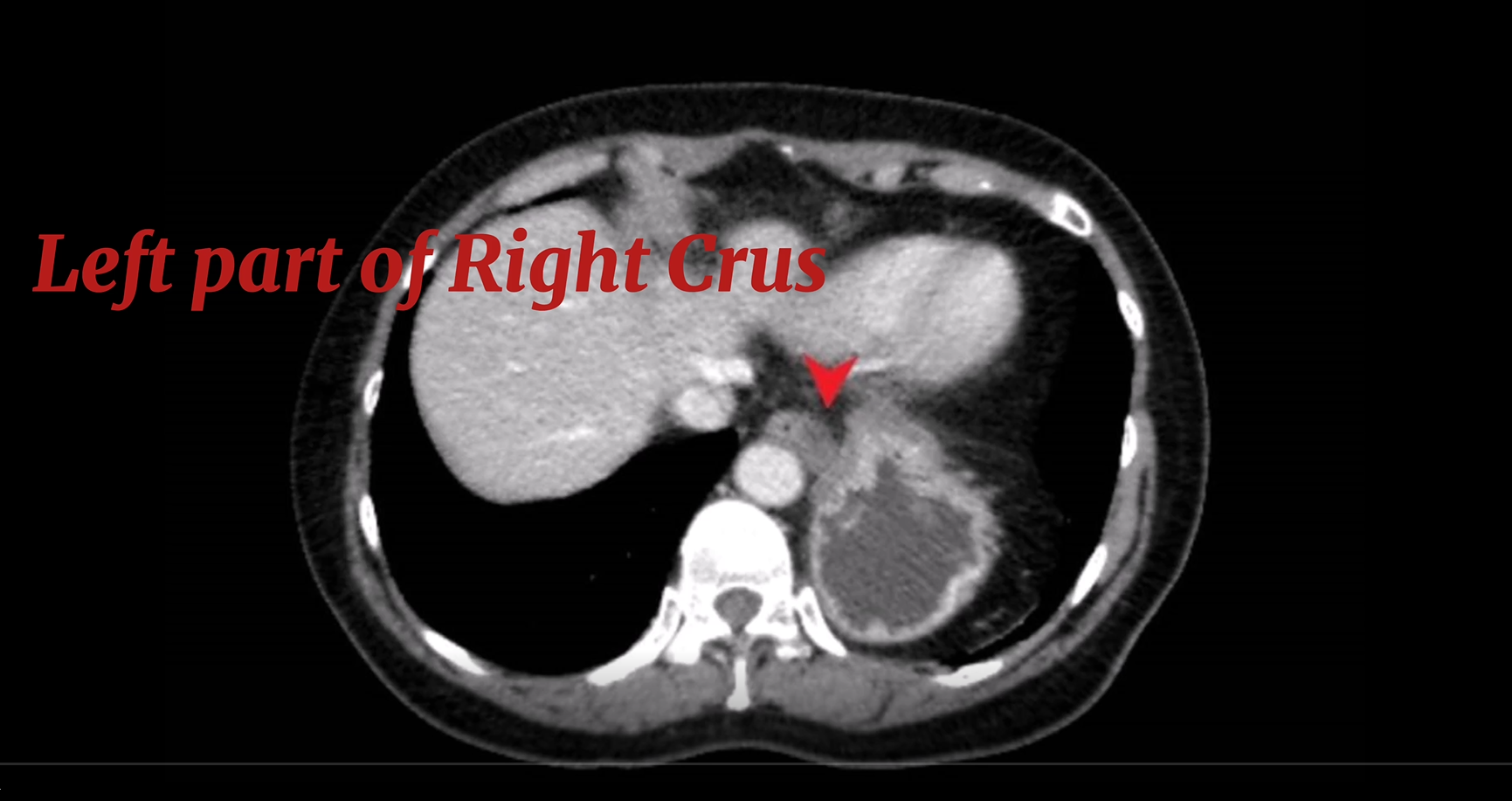 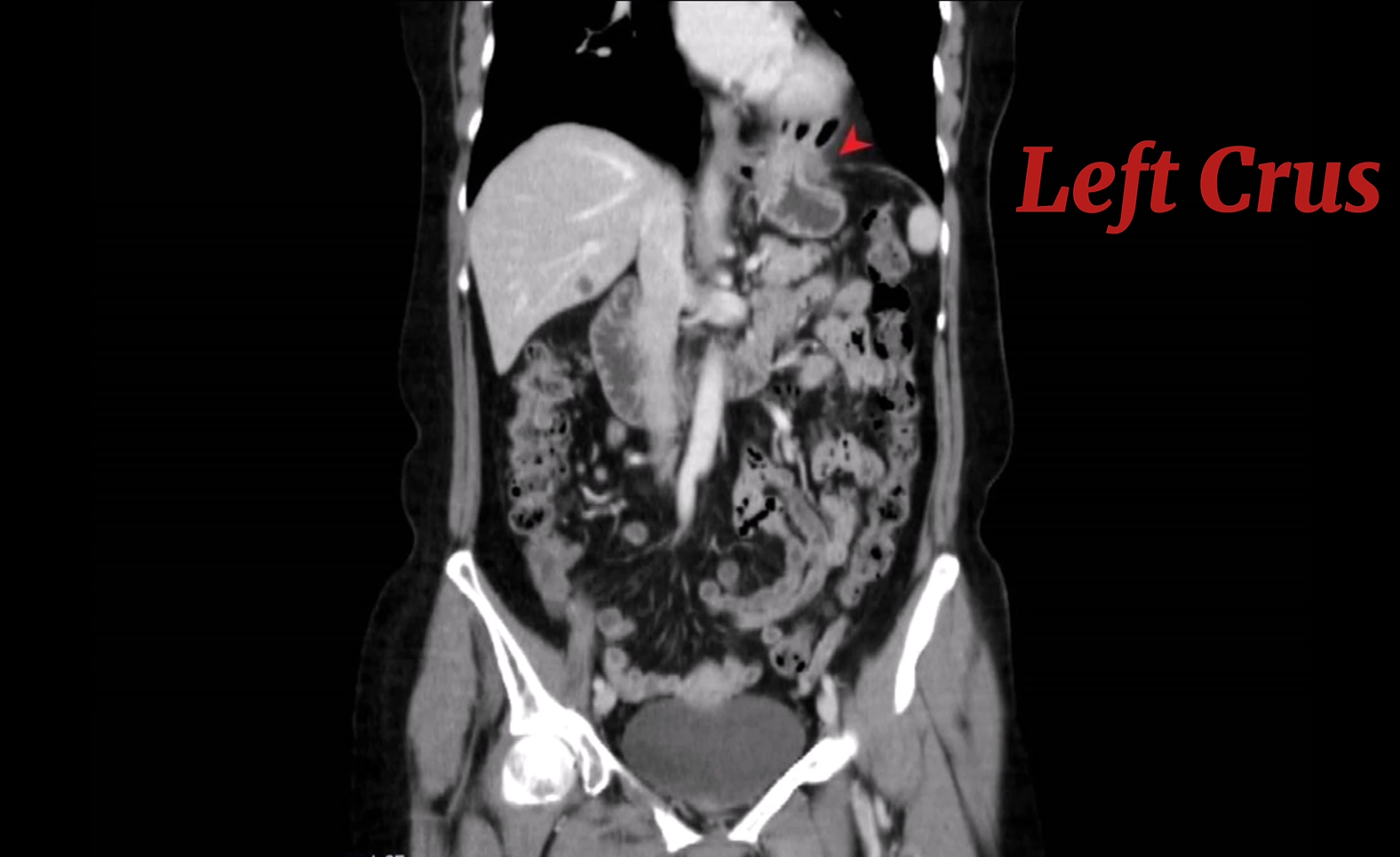 Doi H,Nakanishi S,Ichikawa S,Yamashita H, [A case of parahiatal hernia with vomiting, and a review of the literature]. Nihon Shokakibyo Gakkai zasshi = The Japanese journal of gastro-enterology. 2011 Feb;     [PubMed PMID: 21307630]

Neto RML,Herbella FAM,Schlottmann F,Patti MG, Does DeMeester score still define GERD? Diseases of the esophagus : official journal of the International Society for Diseases of the Esophagus. 2019 May 1;     [PubMed PMID: 30561585]