The contracted socket is a dreaded complication of anophthalmos, which leads to the shortening of the fornices, ultimately leading to an inability to retain a prosthesis. A timely and careful diagnosis is necessary to avoid the formation of this condition. This activity reviews the prevention, evaluation, and surgical management of contracted sockets with implants, prostheses, grafts.

Contracted socket, one of the most dreaded complications of anophthalmos, refers to shrinkage of orbital tissue accompanied by a reduction in the orbital volume along with a decrease in the forniceal depth. It eventually results in an inability to sustain a prosthesis. Not only is it aesthetically unpleasant to the patient, but it also results in significant functional as well as psychosocial disability.[1] Efficient reconstruction of these sockets followed by close follow-up may help improve the quality of life and prevent the subsequent disastrous complications of the contracted socket.[2][3]

Anophthalmic socket is rarely congenital, with a prevalence of 0.2 to 0.3 per 10,000 live births. Acquired anophthalmos due to surgical interventions is much more common, and the prevalence of acquired anophthalmia following enucleation is 2.6 -5 per 100,000 population. There is no direct relationship between age and sex and the amount of contraction of the socket. The involvement of the left eye was more than the right eye for reasons unknown.[5]

Patients with contracted sockets present with an inability to sustain a prosthesis. Discharge is a common complaint that may result from poor prosthetic fit or extruding implant. This may be associated with the poor movement of ocular prothesis and poor cosmetic appearance, entropion, ectropion, infection, ptosis.[6] Many patients suffer from eyelid malpositions like entropion, ectropion, ptosis, which also required surgeries.

An impression of the socket is taken with an impression tray after injection of alginate paste into the socket. On solidification of the paste, a mold of the socket is obtained. The area of the iris is marked and painted. An acrylic dough is heated to get a white model and painted to match the fellow eye. It mainly comprises the sclera and iris and is colored and polished to make the prosthesis look natural.[15]

Orbital implants are medical prosthetics used to replace the lost orbital volume and allow a prosthetic eye movement following enucleation (or evisceration). It may be integrated [porous polyethylene -(Medpor), Hydroxyapatite], non-integrated (Silicone, PMMA). The shapes of the implants are usually spherical and range from 12 to 24 mm in diameter. The wrapping materials act as a buffer to shield the conjunctiva and act as an attachment of the extraocular muscles.[16]

Wrapping materials may be either organic (autologous and heterologous) or alloplastic. A-scan ultrasonography of the fellow eye provides a useful tool for predicting the implant size before surgery for optimal volume replacement. The use of the formula, axial length minus 2 mm, gives implant diameter, which is enough to replace the orbital volume.[17] There is significant variability in the volume of an adult globe (7-9 ml), and these patients usually accommodate implants between 20 and 22 mm in size.

The major goals in managing a contracted socket include optimization of motility and attainment of orbit and eyelid symmetry.[18] A meticulous approach while performing enucleation/evisceration plays a key role in achieving optimal functional and cosmetic outcomes. Careful consideration should be given to preserving conjunctiva and tenon’s capsule while dissecting, insertion of an adequate-sized orbital implant, and performing a layered closure over the implant. The contracted socket management mainly depends on the severity of the contraction and residual orbital volume.[8]

A mild contracted socket (Grade1/2), characterized by shallowing of the inferior fornix, can effectively be managed by securing fornix-forming sutures. The fornices may be deepened by placing mattress sutures over a silastic stent (closed method) or by operating on the lateral canthal tendon in addition to fornix reconstruction (open method). This is followed by the placement of a customized prosthesis 2 to 3 weeks following the procedure. At times, lower lid entropion, with or without lid laxity, may be seen in association with the contracted socket. For this, a Weiss procedure (transverse blepharotomy with marginal rotation) is reasonably successful. Horizontal lid shortening may be useful to address the associated laxity. Alternatively, grafts (nasal septum, auricular cartilage, sclera, hard palate, or fascia lata) may be placed for lengthening the posterior lamina.[19][20]

The management of moderately (Grade 3) contracted socket, characterized by shortening all the fornices, warrants grafts' placement. Full-thickness mucous membrane grafting (MMG) is preferred over partial-thickness due to less incidence of shrinkage and is the most widely performed procedure for surface expansion of the socket.[21] The preferred donor sites for MMG are oral mucosa of cheeks and lips, hard palate, or preputial skin of labia.[22]

As a rule, the harvested graft must always be 40% to 50% bigger than the anticipated area to allow for subsequent shrinkage and healing. Certain drawbacks of these grafts, such as foul-smelling discharge and occurrence of post-operative shrinkage, demand the use of alternative materials.[23] Amniotic membrane is one of the effective substitutes, and in fact, few studies have shown the superiority of amniotic membrane over mucous membrane grafts. It is readily available, has a swift recovery time, has anti-fibrotic, anti-inflammatory, and anti-microbial properties, and propensity to cause minimal shrinkage, making it a viable alternative.[24][25] However, its low tensile strength and fragile nature limit its use as the first line of choice.[26]

Severe (Grade 4/5) contracted socket is characterized by volume as well as surface loss. In such cases, where volume loss exceeds 50 percent, prosthesis alone is insufficient. A secondary orbital implant or a dermis fat graft is further required to substitute for the volume loss.[27] Dermis fat graft (DFG) is harvested from the gluteal region's outer and upper quadrant as this prevents damage to the sciatic nerve and doesn’t involve the weight-bearing area. Although highly effective, DFGs aren’t devoid of complications. These include necrosis, fat atrophy, the formation of deep subconjunctival cysts, post-operative hematoma, granuloma formation, ulceration, and dehiscence at the donor site.[28]

Caution is necessary to avoid the inclusion of epidermis while harvesting DFG. To minimize the risk of central ulceration, a discoid or banana-shaped graft is harvested. In special situations, such as a dry avascular socket, placement of a pedicle flap provides a vascular bed that enhances graft survival and provides additional volume to the socket. Examples include superficial temporalis fascia, retro-auricular flap, galeal flap, or thoracodorsal artery perforator.[29][30][31][32][33]

Grade 5 contracted socket, also known as Malignant/Inoperable socket, is associated with multiple failed surgical attempts. For these recalcitrant sockets, Dortzbach and Callahan have advocated exenteration (as any further surgical intervention is likely to fail) followed by fitting a prosthesis.[34]

As a general rule, an appropriate-sized conformer must be placed to maintain the graft against the vascular bed and should be left.

The contracted socket must always be differentiated from post-enucleation socket syndrome (PESS), a term coined by Tyler and Collin.[35] PESS is characterized by superior sulcus deformity, laxity of the lower lid, lid anomalies like ptosis or retraction, and an ill-fitting prosthesis. Replacement of volume loss with silicone implants encased in the homologous sclera (sclera-silicone implant) helps achieve good postoperative motility and satisfactory outcomes.[36]

A meticulously performed initial surgery(evisceration/enucleation) and placement of an orbital implant play a pivotal role in achieving a favorable prognosis.[37] Factors such as dry or irradiated sockets, infection, cicatrization, history of previously failed surgeries, a higher degree of contraction, pre-existing ocular surface disease are associated with a poorer prognosis. They should be timely detected and managed according to their severity. The ultimate goal is to provide a socket that can maintain a prosthesis.[38]

A contracted socket is itself a grave complication. With every failure, the ability to retain a prosthesis deteriorates, and the morbidity increases. Reconstruction is always associated with a risk of infection, which is higher in immunocompromised patients.

Flap or graft-related complications like necrosis, fat atrophy, the formation of deep subconjunctival cysts, post-operative hematoma, granuloma formation, ulceration, and dehiscence at the donor site as discussed above, may ensue.

The patient, rather than the healthcare community, represents the first line of defense in combating the devastating sequelae of the contracted socket. Inability to retain prosthesis in a contracted socket is aesthetically disabling and has a profound psychosocial impact on the patient and his/her family. Frequent postoperative follow-up visits and education regarding hygiene maintenance and self-care are the keys to avoid disastrous complications. Use of customized prosthesis, a regular and thorough cleaning, periodic replacement of prosthesis, and seeking an expert opinion from the ocularist and the ophthalmologist, as and when required, will lead to enhanced cosmetic and functional outcomes.

A contracted socket is a functional as well as a cosmetically disabling entity. Prevention is always better than cure. Scrupulous tissue handling during the primary procedure, placement of an adequately sized implant, layered closure over the implant, use of customized prosthesis post-operatively, and regular follow-ups may help prevent this debilitating condition. The outcomes are unsatisfactory in severely contracted sockets as the surface is inadequate and is usually accompanied by more than one pathology. An aggressive surgical approach is performed to rehabilitate these sockets, and the results are highly unpredictable.

A contracted socket is a challenging entity for an oculoplastic surgeon. It may develop at any time following removal of the eye. Additional pathologies frequently accompany the contracted socket. Although the patient may eventually wear the prosthesis in most cases, it demands a high level of care from both the patient and the concerned clinician. A lifelong follow-up is recommended to minimize subsequent complications. A constant open communication line involving the entire interprofessional healthcare team, including the patient, the ocularist, the ophthalmologist, family clinician/mid-level practitioner, and ophthalmology-trained nursing staff, is highly encouraged for best outcomes. [Level 5] 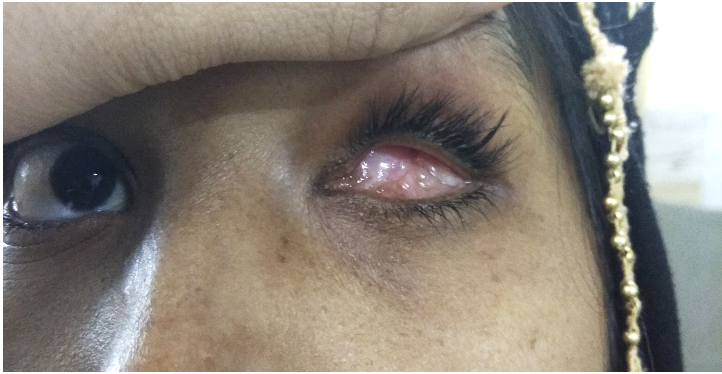 Guyuron B, The role of flaps in the management of contracted eye sockets. Advances in ophthalmic plastic and reconstructive surgery. 1992;     [PubMed PMID: 1457057]

Vistnes LM,Iverson RE, Surgical treatment of the contracted socket. Plastic and reconstructive surgery. 1974 May;     [PubMed PMID: 4595230]

Bosniak SL, Reconstruction of the anophthalmic socket: state of the art. Advances in ophthalmic plastic and reconstructive surgery. 1987;     [PubMed PMID: 3332075]