Hydroxyapatite deposition disease is a common clinical entity that sometimes presents with joint pain. Shoulder pain is one of the most common causes of presentations in the primary care setting. This activity outlines and explains the role of ultrasound-guided barbotage in treating hydroxyapatite deposition in the rotator cuff tendons. This activity also highlights the steps involved in this procedure and elaborates on some of the interprofessional team's technical factors involved in procedural success.

Hydroxyapatite crystal deposition disease (HADD) is characterized by the deposition of hydroxyapatite (HA) crystals within the intra-articular and periarticular regions of the joint.[1][2] One of the most commonly involved sites of disease includes the rotator cuff muscle tendons. When involving the tendons and symptomatic, HADD is recognized as the clinical entity of calcific tendinitis. Shoulder barbotage of hydroxyapatite deposition disease is a treatment option for managing pain in patients affected by calcific tendinitis. [3] It is often performed with subacromial/subdeltoid bursal steroid injection. The important aspects of ultrasound-guided shoulder barbotage include the following:

Hydroxyapatite crystal deposition disease is a relatively common pathologic entity resulting from the formation of calcium crystal deposits within and around tendons and other connective tissue structures. [4] Often affecting middle-aged adults, the majority of cases affect the supraspinatus and the infraspinatus tendons, followed by the hip and spine. [5][6] While the cause of HADD is not clearly understood, various sources have suggested a degenerative process. [5] HADD can be divided into four phases: the pre-calcific, formative, resorptive, and post-calcific phases. [5] The pre-calcific phase is characterized by the metaplasia of collagen fibers of a tendon into fibrocartilage tissue. The formative phase is characterized by chondrocyte development and HADD crystal formation. The formative phase is also characterized by a resting state of the crystalline deposits. The resorptive phase is characterized by inflammation, while the post-calcific phase is characterized by capillary and collagen formation. Oftentimes underlying bone is affected, resulting in cortical erosion and periosteal reaction both in a solid and lamellated appearance. Underlying marrow involvement can also be seen. In addition, HA crystals can rupture into the subacromial/subdeltoid bursa resulting in painful bursitis, or rupture into the glenohumeral joint resulting in a destructive, inflammatory arthropathy termed Milwaukee shoulder, which can mimic septic arthritis.

HADD is most often diagnosed on radiographs. Frequently HADD is noted involving the rotator cuff tendons on chest radiographs. On radiography, hydroxyapatite crystals are found to be "fluffy" and "globular" in appearance. These crystals can either be well-defined or ill-defined based on their chronicity, with well-defined crystals suggesting a chronic deposit. CT can also be used to diagnose calcific tendinitis of the longus colli muscle, especially when evaluating for deep neck soft tissue infection and trauma. [7] CT also has the added ability to distinguish HADD from monosodium urate crystallopathy. [8] Magnetic resonance imaging(MRI) is also often performed to assess for the presence of inflammation. MRI can also assist in evaluating other pathologies, especially if HADD is suspected to be an incidental finding in the setting of a suspected alternative diagnosis. [9] Soft tissue edema is often seen in the acute inflammatory setting adjacent to the crystalline deposits. MRI sequences often show signal voids at the site of mineralization but can also present as an intermediate signal on T1 sequences. HA deposits can be difficult to identify on MRI as they often appear T1/T2 hypointense, blending with the hypointense tendons. This is just one reason why obtaining and reviewing radiographs prior to MRI is essential.

The rotator cuff tendons constitute the most common site of HADD. The supraspinatus, subscapularis, infraspinatus, and the teres minor muscle tendons form a covering over the humeral head. Deposition of HA at these tendons is often noted on radiographs at the respective tendon sites at or adjacent to the humeral head. Considering the tendon fibers are not visualized on radiography, HA is often noted as floating radiopaque densities close to or at the insertion of these tendons. The supraspinatus tendon constitutes one of the most common sites of HADD involvement. The supraspinatus muscle originates from the supraspinatus fossa of the scapula and inserts onto the greater tuberosity on the superior (most anterior adjacent to the bicipital groove) and most anterior aspect of the middle facet of the humerus as the supraspinatus tendon. [10] The infraspinatus tendon inserts on the middle facet, which is sloped posteriorly on a sagittal view. It should be noted that the posterior fibers of the supraspinatus tendon blend with the anterior fibers of the infraspinatus tendon for a conjoined attachment at the anterior aspect of the middle facet. Therefore it is possible for HADD and rotator cuff tears to involve both tendons simultaneously. Several bursae also surround the shoulder, with the largest being the subacromial-subdeltoid bursa. The subacromial-subdeltoid bursa assists in shoulder motion and plays an important role in the ultrasound-guided barbotage procedure detailed further below.

Ultrasound plays a primary role in image-guided treatment, such as in the setting of barbotage and steroid injection for pain relief, and is safe and effective. [11][12][13] HADD can present as echogenic calcifications with posterior acoustic shadowing or present as nodular echogenic foci of calcification without posterior acoustic shadowing. Often crystals can be multiple and adjacent to each other, having a fragmented appearance. A cystic morphology has also been described with a hyperechoic wall and anechoic internally. Acute calcific tendinitis shows increased doppler flow and thickening of the subacromial-subdeltoid bursa, an additional feature of the acute inflammatory phase. Ultrasound-guided barbotage constitutes a needling and lavage procedure. The needling portion of the procedure attempts to break down the hydroxyapatite crystals deposited within the rotator cuff tendon being treated. The lavage procedure attempts to remove the resultant fragmented crystals. This procedure is also coupled with corticosteroid injection of the subacromial-subdeltoid bursa for further pain relief.

The treatment options of calcific tendinitis often include oral analgesics. Additional treatment options include corticosteroid injection and ultrasound-guided barabotage. Surgical treatment and extracorporeal shockwave therapy are additional considerations depending on presentation and prior treatment course.

Some considerations with regards to absolute and relative contraindications include:

While equipment can vary institutionally, the following list includes possible equipment and pharmacotherapeutic mixture used in this procedure:

Evaluation of ultrasound-guided barbotage of the rotator cuff tendons should begin with a thorough history and physical examination. In addition, a shoulder physical exam to include evaluation of other etiologies such as a septic joint should be performed. Laboratory analysis to include white blood cell count and inflammatory markers should also be obtained in the patient's initial workup.

Clinicians performing the procedures should have a basic understanding of the sonographic anatomy of the shoulder joint. Sonography has gradually replaced fluoroscopy in treating calcific tendinitis of the shoulder due to its ease of use and the radiation involved in fluoroscopy. Sonography is also able to easily evaluate for subtle changes in joint pathology and can evaluate for tears and degree of calcific deposits within the tendon. The humeral head (particularly the bicipital groove), coracoid process, the distal clavicle, and the acromion are often used as landmarks in localizing the supraspinatus tendon.

Before beginning the procedure, a clinician needs to have a thorough discussion with the patient regarding the following:

Before beginning the procedure, an initial ultrasound exam should be performed to confirm and document the presence of hydroxyapatite deposition within the intended tendon target. A final time-out should also be performed before beginning the procedure. The skin entry site should then be cleaned, and a sterile drape should be put in place. The ultrasound probe is covered with a sterile sleeve.

Complications include bruising, hematoma formation, infections, and acute exacerbation of pain. In some institutions, patients are often advised to make arrangements for transport. Driving is possible the day after the procedure based on patient comfort. Patients are advised to take oral analgesics for pain relief in the acute post-procedural setting in the days following the procedure. Other complications also include bursitis that develops post-procedure or, in rare cases, tendon rupture.

Various associations that involve hormonal, genetic, and metabolic syndromes have been associated with HADD. When asymptomatic, HADD is often discovered incidentally on radiographs. Clinical symptoms can include acute pain, chronic mild pain, and acute-on-chronic pain. Patients can also present with fever. Acute episodes can present with swelling and warmth, in which case a septic joint should be included in the differential diagnosis. Other symptoms include a limited range of motion. Laboratory analysis can include mildly elevated inflammatory markers in the acute setting. Pain is often exacerbated during movement. Pain is also often confined to the affected joint and can be exacerbated during nighttime. Milwaukee shoulder refers to a destructive arthropathy of the shoulder joint involving the rupture/deposition of hydroxyapatite crystals into the glenohumeral joint. [14] When this process occurs in the hands or feet and the HA deposits in the periarticular soft tissues, it is termed periarticular calcific arthritis.

The role of a sonographer or technologist is important in helping the clinician during the procedure, considering optimal visualization of the needle or needles (in a two-needle technique) is critical to avoiding damage to adjacent structures. Patient comfort is also important in properly performing this sometimes technically challenging procedure as significant patient movement can affect satisfactory targeting of the hydroxyapatite crystals within the rotator cuff tendon. Movement can affect needle trajectory and injury to the adjacent musculature or tendons. The sonographer or technologist plays an important role in positioning the patient and limiting patient movement by helping with patient comfort. In addition, the technologist operates the ultrasound control panel while the clinician maintains the sterile field, handles the ultrasound probe, and performs the procedure. 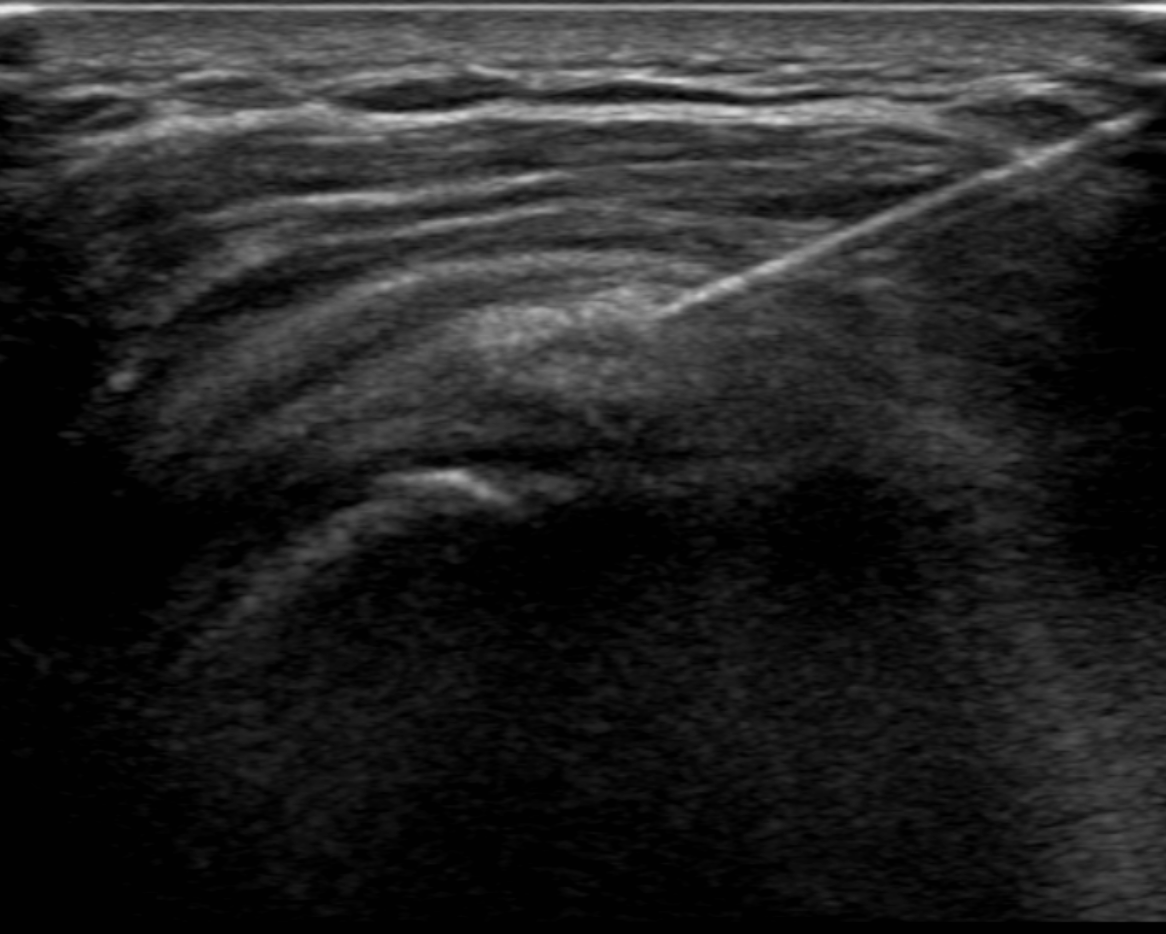 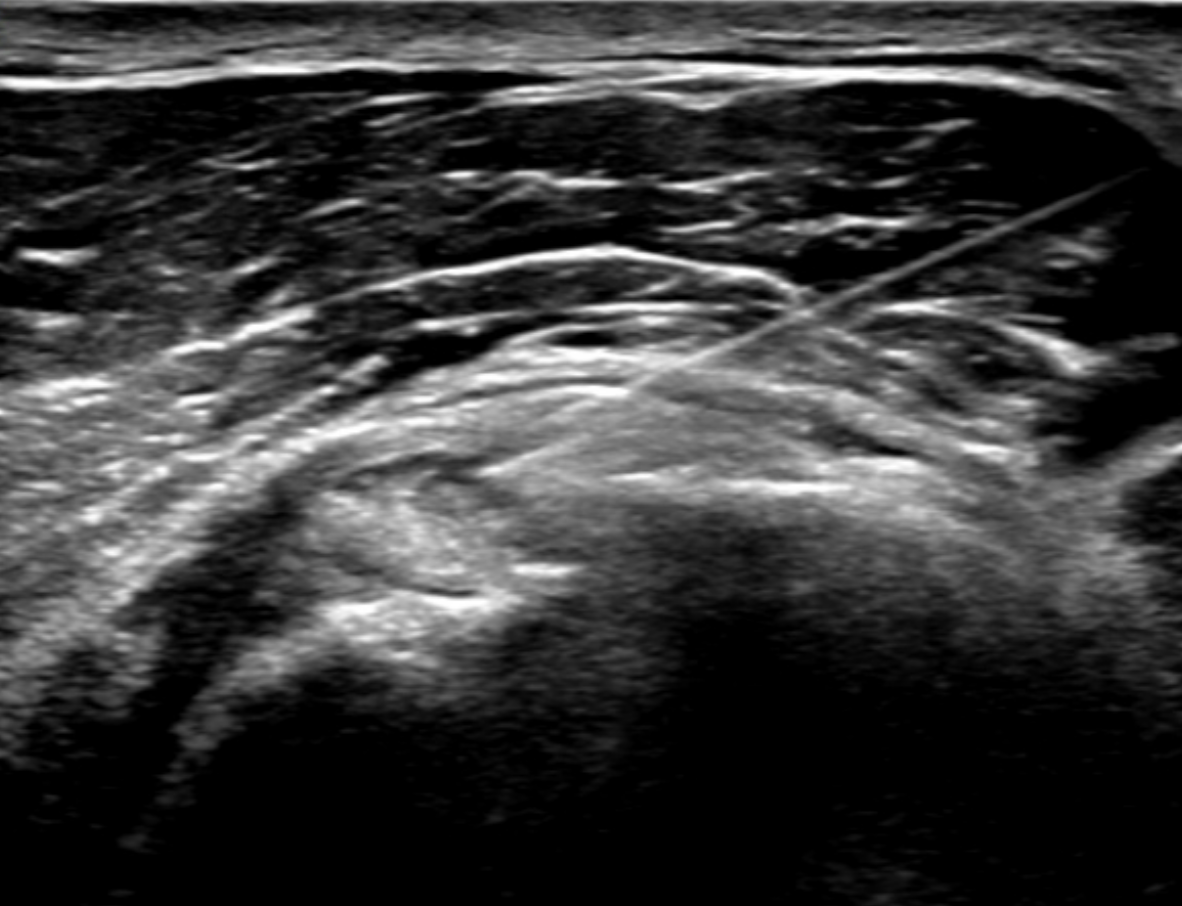 Gatt DL,Charalambous CP, Ultrasound-guided barbotage for calcific tendonitis of the shoulder: a systematic review including 908 patients. Arthroscopy : the journal of arthroscopic     [PubMed PMID: 24813322]