Noninvasive physiological examinations are often the first line of testing, consisting of a physical exam, ankle-brachial index, or segmental limb pressures. Duplex ultrasonography is a complementary modality that can help confirm the diagnosis, evaluate the extent of disease, monitor progression, and identify complications.

Performing and interpreting a peripheral arterial ultrasound necessitates a sufficient understanding of the normal anatomy and caliber of arterial vessels, pathophysiology of arterial disease, and the hemodynamics of normal and abnormal flow. Moreover, the exam requires a baseline knowledge of the various ultrasonographic modalities and appropriate settings and techniques. Both the sonographer and the interpreting physician need to recognize what constitutes an adequate study.

Ultrasound (US) is widely available, exposes the patient to no ionizing radiation, is typically less expensive, and has a smaller footprint than other cross-sectional imaging modalities. Drawbacks include the poor conductivity of soundwaves through air and bone and the attenuation of sound waves as they propagate through soft tissues, particularly in patients with larger body habitus. These constraints are most pronounced for the mediastinal and visceral vasculature. Peripheral assessment, however, has its own limitations, notably in patients with extensive edema, wounds, or scarring.

The external iliac artery ends at the inferior epigastric artery origin, medially, and the deep iliac circumflex artery origin laterally, becoming the common femoral artery(average diameter 5 to 9 mm). The common femoral artery and vein are contained within the femoral sheath, with the femoral nerve immediately lateral. After a short course, the common femoral bifurcates into the superficial femoral and profunda femoris arteries. The profunda femoris artery is posterolateral and takes a deep course. The superficial femoral artery is the predominant arterial supply to the thigh, and it courses through the adductor hiatus, becoming the popliteal artery as it emerges from Hunter's canal.

For a single vessel in continuity, blood flow should be equal between any two points. If the cross-sectional area decreases, velocity must increase proportionally to maintain flow. While the vascular system can accommodate a degree of stenosis via variable vascular wall compliance and collateral formation, this principle essentially holds up. It is the basis for ultrasonographic grading of stenosis.[2]

When blood is flowing normally through a non-diseased artery, the flow is laminar, and the spectral waveform appears sharp and distinct. Just distal to a stenosis, blood flow becomes nonlaminar and turbulent with erythrocytes moving at different velocities and in multiple directions. The spectral waveform is broadened to encompass the various velocities at one point and time.

It is also necessary to understand the basic principles of and the different modes of ultrasound (B-mode, Doppler, color, and power doppler) used during arterial evaluation.

Ultrasonography interrogates tissues via high-frequency sound waves. The speed of sound through tissues is assumed to be 1540 m/s. The ultrasound probe estimates depth based on the time elapsed between the outgoing pulse and its reflection. Brightness depicted on the grayscale US depends on the reflected wave's intensity.

B-Mode (or brightness mode) is also known as grayscale ultrasound. It is used for anatomical localization, vessel size measurements, and characterization of atherosclerotic plaque. Both intraluminal abnormalities such as an intimal dissection flap or thrombus and extraluminal abnormalities such as hematomas can usually be identified. The highest quality images arise from positioning the transducer near perpendicular to the vessel of interest.

Doppler ultrasound (also referred to as spectral or pulsed-wave US) utilizes the Doppler effect to estimate the velocity of flowing blood. A sound wave frequency is shifted when it encounters a moving reflector (erythrocyte), increasing when the reflector moves toward the source and decreasing when it moves away. The change in frequency is maximum when the angle of the ultrasound beam is directed against the axis of blood flow (parallel to it). There is no Doppler effect when the sound wave is precisely perpendicular. A doppler angle of 30 to 60 degrees is ideal. Errors get amplified the closer the transducer is to 90 degrees. Additionally, at an angle of fewer than 30 degrees, the reflection of sound waves from the vessel is less likely to be recorded. Spectral analysis refers to the graphical display of recorded velocity plotted against the elapsed time.

The term duplex refers to using two ultrasound modes concurrently, most often B-mode and Doppler. Duplex US is used to image the direction and characteristics of blood vessels. Central, continuous blood flow is commonly seen in veins, while peripheral, pulsatile flow is seen in normal arteries. Arterial vascular beds are further classified as low-resistance or high-resistance systems. Low resistance waveforms have antegrade blood flow during diastole as the organs they perfuse (kidneys, brain, testes) need continuous blood flow. These waveforms are classically monophasic with a slower, gentler systolic upstroke. High resistance waveforms often have a brief reversal of flow during diastole as the organs they perfuse do not require continuous blood flow (musculature). This results in triphasic waveforms with a brisk systolic upstroke and a brief period of flow reversal.

Color Doppler maps demonstrate flow information over a selected region of interest. Flow towards and away from the transducer is mapped to using colors, most commonly red and blue, with differing hues related to the magnitude of the frequency shift (velocity). Color doppler helps quickly identify and localize vascular structures. Further, it gives an overview of the vessel parameters and draws attention to turbulent areas through dramatic color changes. The absence of expected color flow can also signify thromboembolic disease or an intimal dissection flap.

Power duplex uses Doppler shift information to map the amount of moving red blood cells rather than the direction or velocity. Since both high and low velocities, regardless if they are moving toward or away from the transducer, are equally registered, power Doppler is much more sensitive to slower flow. In turn, the increased sensitivity causes flash artifacts from tissue vibration/motion to become more apparent.[3]

A monophasic waveform has slow, blunted antegrade systolic flow, which continues into diastole. Monophasic arterial waveforms are always abnormal and are often seen downstream from stenoses or in collateral vessels formed around the occlusive disease. At an area of stenosis, maximum peak systolic velocity (PSV) of greater than 200cm/s or PSV ratio at the stenosis compared to a normal segment proximal or distal to the stenosis greater than 2.0 to 2.5 are diagnostic of hemodynamically significant flow reduction.[6]

In the setting of complete occlusion, there may be a pre-occlusive thump in the waveform as forward blood flow is stopped by the occlusion, absence of color flow at the occlusion, and distal reconstitution with low-velocity, monophasic waveforms.

As the stenosis progresses past 50% of the vessel diameter, altered flow dynamics may result in exertional symptoms. For symptoms to occur during rest, approximately 90% stenosis may be needed.[7]

A common sequela of atherosclerotic disease is aneurysm formation. Aneurysms are saccular or fusiform areas of focal arterial enlargement greater than 1.5 times the average normal vessel diameter. They arise secondary to an intrinsic abnormality of the arterial walls as well as from trauma, vasculitis, or infection. A true aneurysm involves all three layers of the arterial wall; the intima, media, and adventitia. Complications include compression of adjacent structures, rupture, and thromboembolism which can result in ischemia. The risk of complications depends on aneurysm size, with most happening at diameters greater than 2 cm. Aneurysms on sonography appear as focal areas of arterial enlargement, often with mural thrombus and turbulent flow. Peripheral thrombus can give the appearance of a normal luminal caliber.

Popliteal artery aneurysms are the most common peripheral aneurysm accounting for nearly 70%. They are often bilateral and associated with abdominal aortic aneurysms. The second most common peripheral location is the common femoral artery. These should be distinguished from pseudoaneurysms, which are common in the proximal femoral area, mainly from iatrogenic vascular access complications. Unlike true aneurysms, a pseudoaneurysm is a disruption in the arterial wall continuity resulting in a contained, pulsatile hematoma. Under ultrasound, pseudoaneurysms appear as defined collections of swirling color flow, often with a communicating neck and "to-and-fro" flow from an adjacent artery.[8] Management includes watchful waiting, ultrasound-guided compression, or direct thrombin injection. In some cases, surgical ligation or endovascular stenting can be performed.

In post-traumatic settings, arteriovenous fistulae (AVF) may develop. AVF are direct communications between an artery and vein, often with high-velocity turbulent flow between the vessels. The proximal arterial waveforms assume a low-resistance morphology, and the distal venous waveforms assume high flow, multiphasic arterialized waveforms. The strong pulsatile flow at the site of AVF causes tissue vibration artifacts, where perivascular tissue motion is misregistered as color flow, alerting the sonographer to the presence of an AVF. These are often treated by excluding the AVF with a covered stent, embolizing (occluding) the outflow or draining vein, or surgical ligation.[9]

Grayscale ultrasound demonstrates the morphology of the arterial system and plaque characterization. Plaque may be anechoic and indistinguishable from the vessel lumen. In these cases, color Doppler can help delineate the vessel's true lumen. Color Doppler can also help differentiate arteries and veins based on flow direction. It helps quickly delineate turbulent flow areas and stenoses by looking for areas of color aliasing.

The complete peripheral arterial duplex exam begins at the abdominal aorta and follows the arterial system vessels to the ankle. The vessels are evaluated in long- and short-axis with B-mode and pulsed Doppler.

The exam is performed by placing the patient in the supine position. A low-frequency transducer is used to evaluate the aorta from just below the xiphoid process and from just to the left of the umbilicus. The celiac and superior mesenteric arteries serve as useful landmarks. The common and proximal external iliac arteries are then interrogated with the transducer at the angle of the iliac crest. The internal iliac artery takeoff differentiates the common from the external iliac arteries. Graded compression can help displace the overlying bowel, improving visualization.

The areas most prone to the development of atherosclerotic disease are those exposed to higher degrees of shear stress. These include the common iliac artery, superficial femoral artery at the adductor canal, central popliteal artery, and the tibioperoneal trunk. Areas of suspicion are interrogated and graded by comparing the pre-stenotic, stenotic, and post-stenotic segments. It usually takes at least a 50% decrease in vessel diameter (corresponding to a 75% decrease in cross-sectional area) to become hemodynamically significant.

At 51% to 75% luminal narrowing, the stenotic segment's peak systolic velocity is often twice that of the regular proximal segment. The post stenotic segment shows a degree of turbulence and possible monophasic waveforms.

At 76% to 99% stenosis, increased pulsatility becomes apparent in the pre-stenotic segment. The stenotic segment's peak systolic velocity is often greater than four times that of the proximal normal segment and demonstrates monophasic waveforms. There is significant turbulence in the post-stenotic segment and a tardus parvus waveform (a prolonged systolic upstroke and a decreased systolic amplitude with a rounded peak) distal to the stenosis.[11][12]

Peripheral arterial disease is a common disease with profound implications beyond just limb loss. It is associated with increased cardiovascular risk and decreased quality of life metrics, including depression.[13] Duplex ultrasonography is easily accessible, uses no ionizing radiation, and is typically less expensive than other cross-sectional imaging modalities. When used in conjunction with other noninvasive physiological tests, ultrasound can effectively and efficiently diagnose and grade disease to help plan management and monitor disease progression or response to therapy. 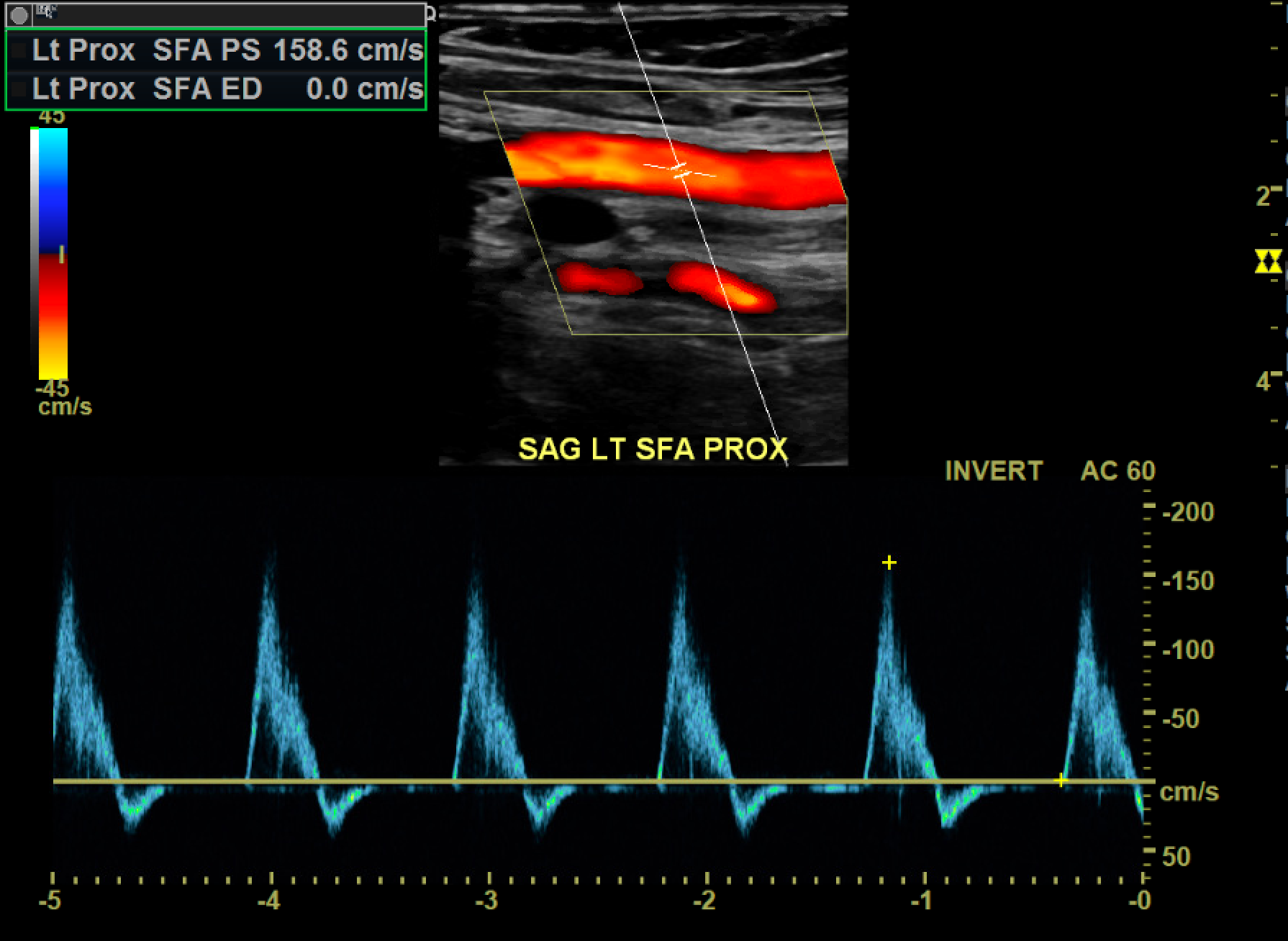 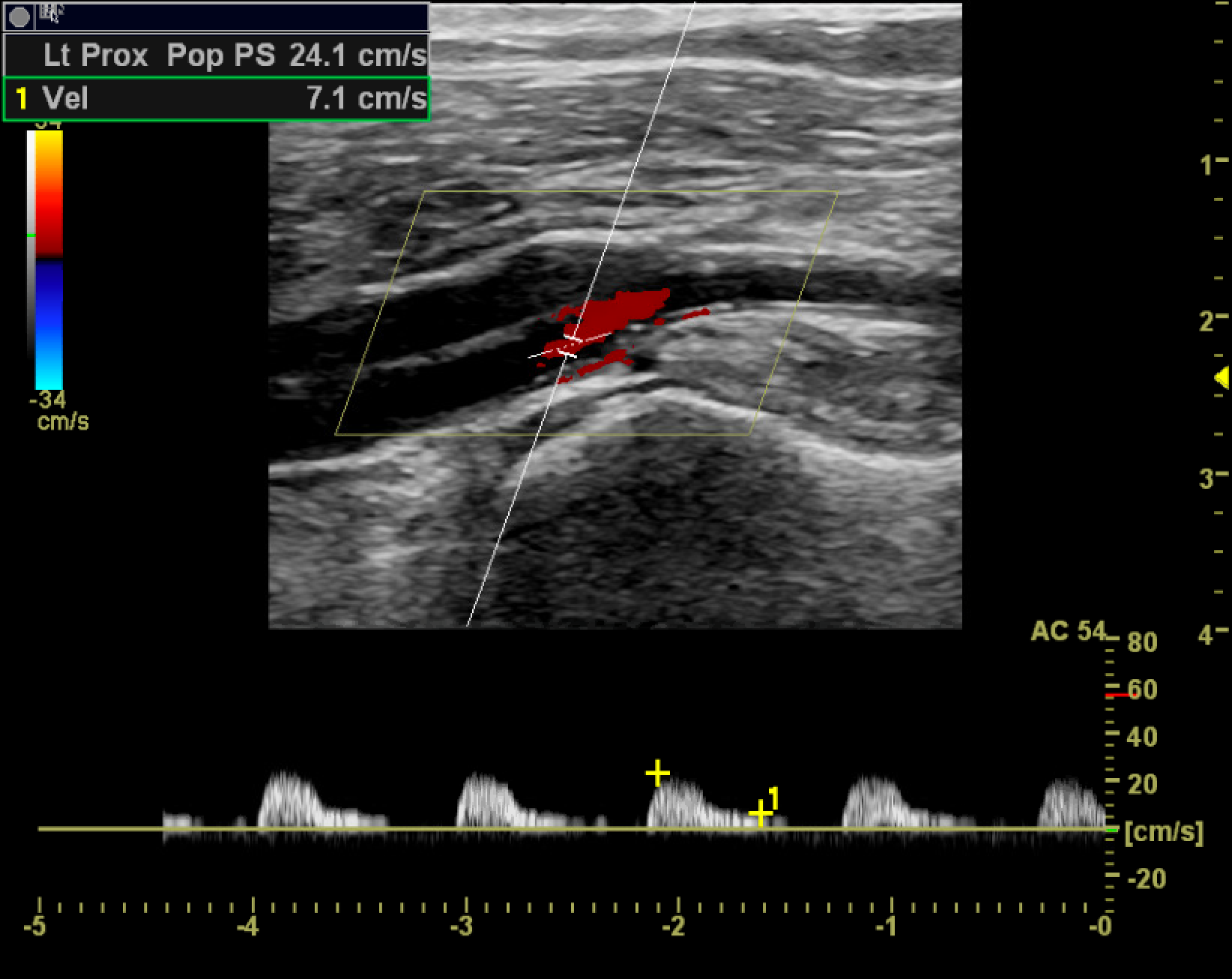 Pseudoaneurysm Note the classic bidirectional 'yin-yang' color flow within the pseudoaneurysm and the to-and-fro flow in the neck.
Courtesy of James Selis, MD 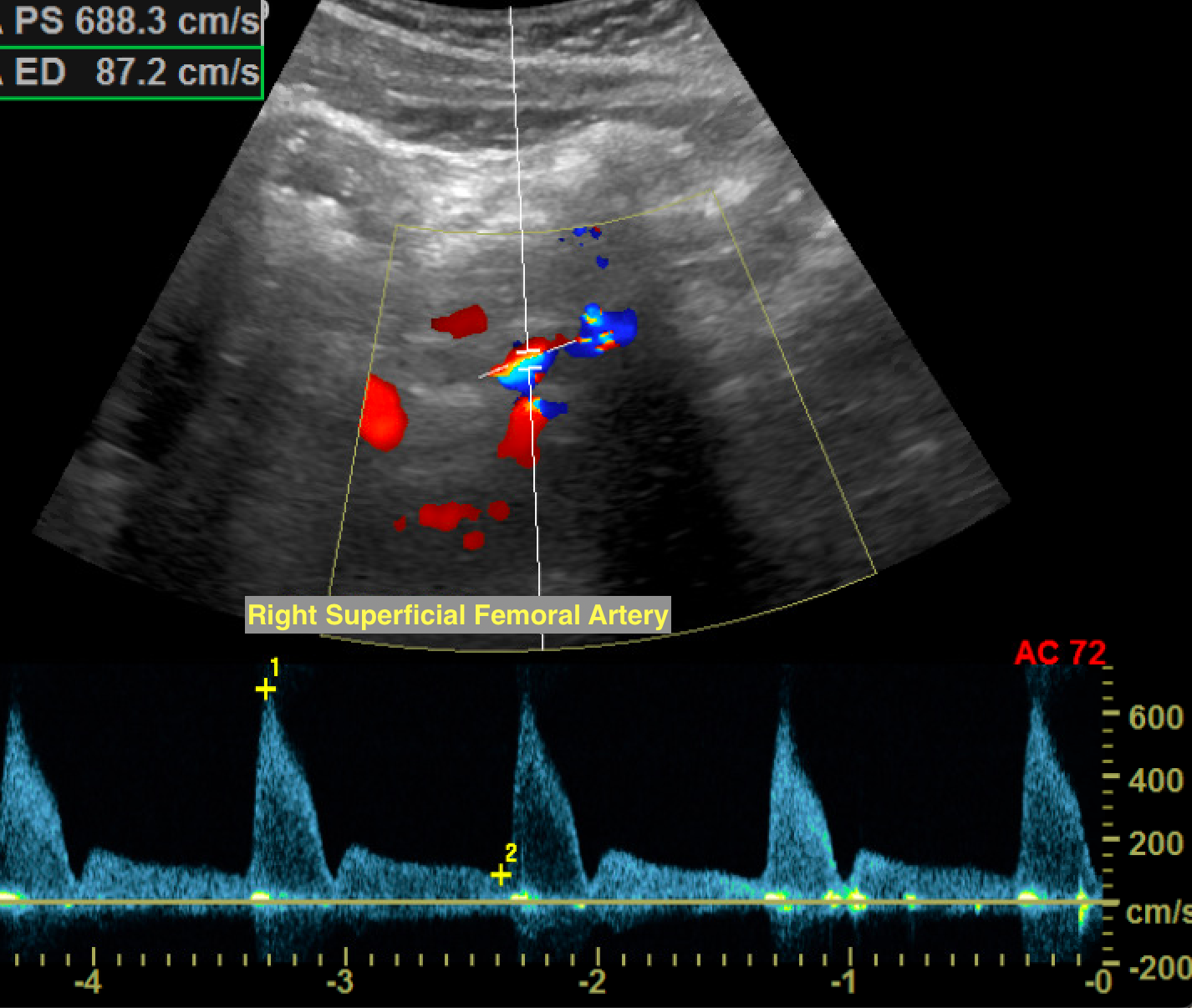 Mittleider D, Noninvasive Arterial Testing: What and When to Use. Seminars in interventional radiology. 2018 Dec;     [PubMed PMID: 30728654]