Several pathological conditions impact the abdominal vasculature, including aneurysms, dissections, atherosclerotic disease, aneurysms, and flow-limiting states. Abdominal aortic aneurysms (AAAs), for instance, are a potentially life-threatening disease process that affects at least 2% of adults over the age of 50.[1] Ultrasound serves as the ideal diagnostic modality for detecting AAAs due to its high sensitivity and specificity.[2][3]

While ultrasound is an excellent method for detecting the presence of AAAs, its role is more limited in assessing other pathologies such as aneurysmal rupture, aortic dissection, abdominal aortic stenosis, major branch pathology, and IVC pathology.

There is no universal protocol for abdominal vascular imaging. This article's proposed protocol is a general guideline that can be used to evaluate the aorta, inferior vena cava, mesenteric arteries, and iliac arteries for sonographic findings consistent with pathology.

The abdominal aorta is the primary vessel that delivers oxygenated blood to our lower extremities and abdominal organs. It begins just beneath the diaphragm and terminates at the bifurcation of the common iliac arteries.[4] The IVC is the major vessel that carries deoxygenated blood from its tributaries within the abdomen, pelvis, and lower extremities to the heart. The IVC courses parallel and to the right of the aorta. Its course begins at the confluence of the iliac veins and terminates at the right atrium.

There are no absolute contraindications to performing this procedure.

Transducers with frequencies ranging from 1.0 to 5.0 MHz will provide adequate images for the typical adult patient. Note that the frequency should be adjusted according to the body habitus of the patient being examined.

This procedure can be performed by registered diagnostic medical sonographers (RDMS) or by ultrasound-trained physicians.

The depth should be set so that the vertebrae can be visualized posterior to the aorta.

The right and left common iliac arteries should be visualized. Their greatest anterior-posterior diameter should be measured in the short and long axis from leading edge to leading edge.

Any pathological finding that the sonographer discovers, such as thrombi, flaps, should be recorded. If an endograft is present, its proximal and distal attachment points should be noted. The sonographer should also apply color and spectral doppler within the lumen of the graft and the aneurysmal sac.

Additional Images of the Mesenteric Arteries, If Clinically Indicated

Bowel gas can often preclude the sonographer from obtaining adequate images. The sonographer can apply steady pressure to the abdomen to attempt to displace bowel gas.[6] Another method to displace bowel gas is to have the patient lay in a lateral decubitus position. Lastly, if images obtained from the anterior abdominal wall are inadequate, the sonographer can attempt to visualize the aorta from a coronal view between the anterior axillary line and the midaxillary line.

The sonographer should visualize and measure the aorta in both short and long axes to ensure that aneurysms are not missed and ensure accurate measurements. Measuring in the long axis can lead to the cylinder tangent effect, which refers to the possibility of underestimating the diameter of a cylindrical structure when accidentally measuring lateral to the vessel’s midline.[6] Measuring in the short plane places the sonographer at theoretical risk of overestimating the aortic diameter if the measurement is accidentally taken at an oblique angle.[7]

In settings where it is not possible to store video clips of sonographic images, still, images of the abdominal aorta should be obtained in two planes at the following levels: the celiac trunk, the superior mesenteric artery, and proximal to the iliac bifurcation.

There are no complications associated with this procedure.

Pathological Findings of the Abdominal Aorta

Ultrasound is highly sensitive and specific for the detection of abdominal aortic aneurysms.[3] Note that there is some variability in the accepted normal values of the abdominal aortic diameter.

Following the American College of Radiology, this author recommends that abdominal aortic diameters ≥ 3 cm should be considered aneurysmal.[8] Note that 3 cm is derived from the assumption that the normal adult abdominal aortic diameter is approximately 2 cm. A vessel is considered aneurysmal once its diameter is 1.5 times larger than its contiguous aortic segment of normal diameter.[8] Diameters between 2 to 3 cm are classified as ectactic because their dilatation is less than 1.5 times larger than the normal diameter.[8] The annual risk of rupture of abdominal aortic aneurysms rises exponentially with increasing diameter.

Aneurysms are commonly classified as either fusiform (involving the entire diameter of the vessel) or saccular (a limited portion of the diameter is involved). This distinction is useful because the differential varies depending on the type of aneurysm.

The abdominal aorta lumen is anechoic sonographically. Any other intraluminal appearance is likely pathological.

A linear echogenic structure within the lumen of the aorta, called an intimal flap, separates the aorta into two distinct lumens is thought to be highly specific for aortic dissection.[10] Given the high morbidity and mortality associated with aortic dissections, the sonographer must be able to recognize this important clinical finding.

Note that the aorta becomes increasingly tortuous as people age. Sometimes, the sidewall of a tortuous aorta can appear similar to an intraluminal clot. This is further reason to image the aorta in two orthogonal axes, as pathology is usually visible in both axes.

Sonographers should be familiar with the normal appearance of endovascular grafts, given this increasingly common procedure. The sonographer should assess for fluid collections at the site of the graft.  Sonographers should also evaluate for endoleak by applying color and spectral Doppler and looking for flow within the aneurysm sac outside of the graft.[11]

A 2017 Cochrane review notes that the sensitivity and specificity of color duplex ultrasound (CDUS) range from 82% to 91% and 93% to 96%, respectively.[13] The Cochrane review also notes that contrast-enhanced ultrasonography (CEUS) is an increasingly utilized modality with better sensitivity and specificity than CDUS and may be useful as a routine surveillance strategy in the future.

Pathological Findings of the Iliac Arteries

Pathological Findings of the Mesenteric Arteries

Variables such as bowel gas, body habitus, and the timing of the patient’s most recent meal can make the interpretation of doppler tracings difficult. A wide range of normal peak systolic velocities has been described for the mesenteric arteries.[15][16] There is little consensus regarding the threshold at which peak systolic velocities correlate with a clinically significant degree of stenosis.[17] Findings should therefore be considered in conjunction with institutional thresholds and the patient’s clinical condition.

Pathological Findings of the IVC

When visualized sonographically, the IVC should be anechoic within its lumen. Hypoechoic thrombi or IVC filters are examples of pathological intraluminal findings.

Note that the anteroposterior diameter of the IVC is often used to attempt to predict fluid responsiveness in critically ill patients. Although IVC diameter and collapsibility estimate CVP, it has not consistently shown utility in predicting a patient’s intravascular volume status or fluid responsiveness.[18][19][20][21]

Should the sonographer have difficulty obtaining adequate images, this requires immediate discussion with the interprofessional care team and radiologist to consider alternative diagnostic modalities. Nurses should also be included in any discussion of the procedure, as well as the findings of the examination. This type of interprofessional healthcare team communication can help ensure more accurate diagnosis and subsequent treatment and improve patient outcomes. [Level 5] 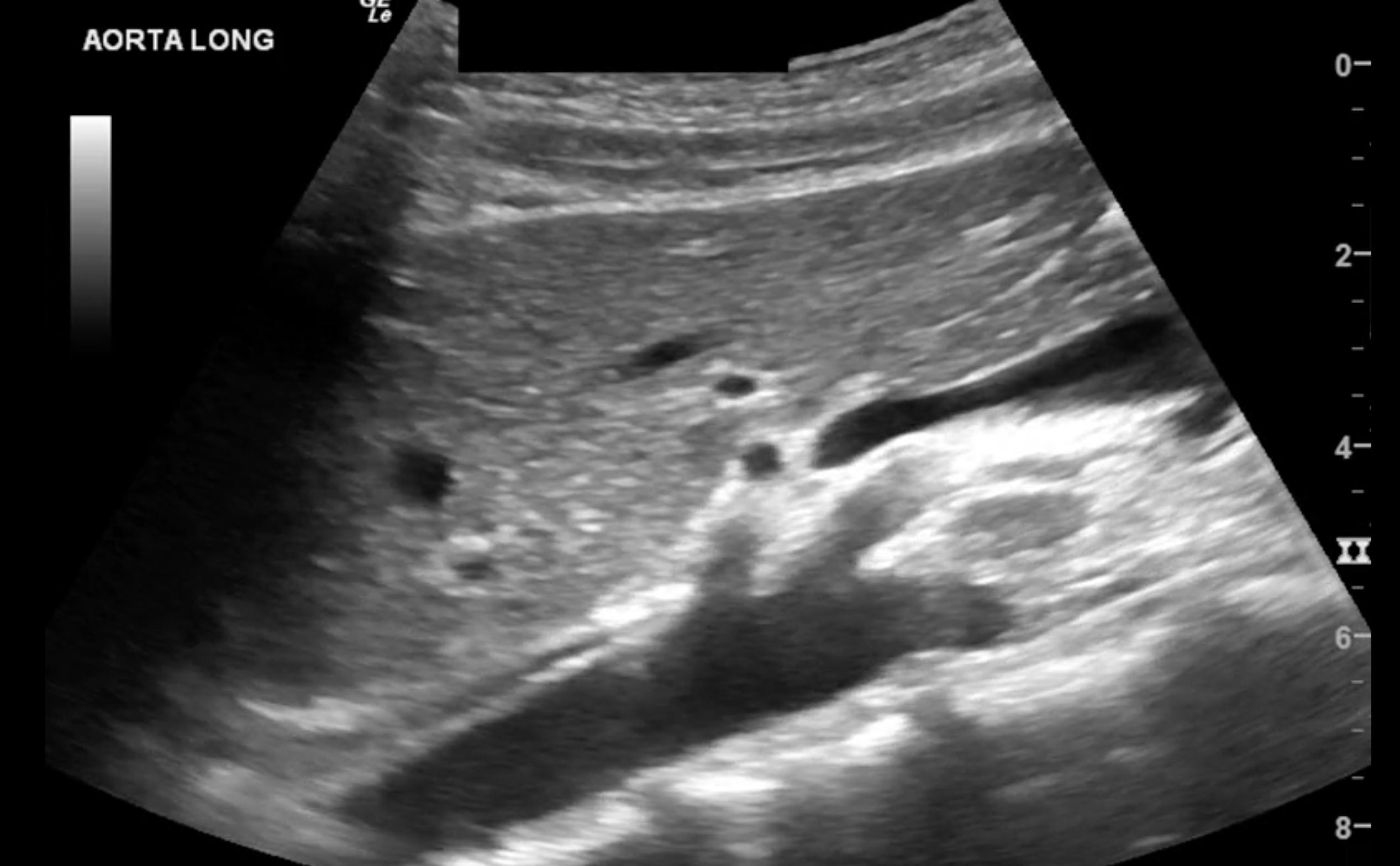 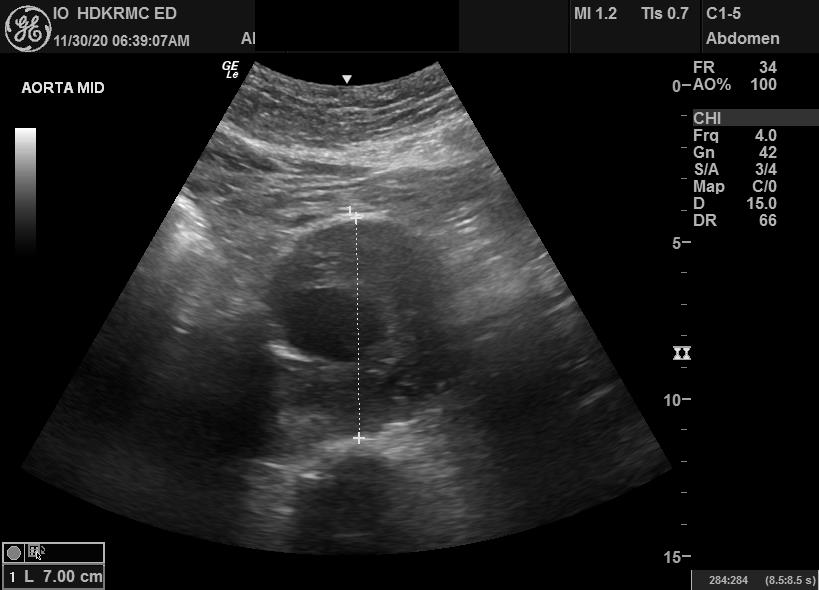 This is a transverse cross-section of the abdominal aorta that has a 7 cm aneurysm. Note the mural thrombus encroaching on the lumen.
This image is courtesy of Kendall Regional Medical Center