Vascular sonography is a generalized term defined by assessment of the venous and arterial system via the use of sound waves. Some of the more commonly encountered pathologies include arterial stenosis and venous thrombosis; however, a wide variety of vascular abnormalities may be identified. Ultrasound also provides an excellent assessment of lymph node morphology and may help characterize malignancy. This activity reviews the assessment, protocols, and interpretation of commonly encountered vascular and lymph node pathologies while reviewing common sonographic artifacts.

Ultrasonography is the use of sound waves to generate medical diagnostic images. The portability, cost-effectiveness, and non-invasive nature of ultrasound have contributed to its widespread use over recent decades.[1] Vascular ultrasound is a generalized term that includes venous duplex and Doppler sonographic assessment of myriad arterial and venous pathology, most commonly including peripheral arterial disease, arterial aneurysms, vascular malformations, venous thrombosis, and venous insufficiency. Sonography can also provide information about the lymphatic system via the depiction of lymph node size and morphology.[2] Herein, the broad general principles of arterial, venous, and lymph node sonography are discussed, with application to some of the more commonly encountered pathologies.

There are three classic components to a triphasic waveform. These include the following:

Low resistance vessels classically show a monophasic waveform.[4] These waveforms are found in arteries supplying organs with high oxygen demand, such as the internal carotid, renal, umbilical, and arteries supplying the gut after a meal. In contradistinction to high resistance vessels, these vessels and their corresponding downstream vessels are continually dilated to allow for increased oxygenation. The gut requires increased blood flow during digestion and less blood flow in times of fasting. Vessels such as the superior mesenteric artery and the inferior mesenteric artery show low resistance waveforms during digestion and high resistance waveforms during fasting.

In a low resistance waveform, there are typically two physiologic portions that may be visualized:

A high RI is found within the vasculature, which is either constricted or limited in distensibility. This may be produced by downstream stenosis or congestion within an organ such as the kidney.  An increased intrarenal arterial RI is seen in chronic renal failure (>0.7) due to decreased tissue compliance.  In contrast, renal artery stenosis would show low RI (<0.5) due to dampened systolic peaks and normal diastolic flow. Renal vein thrombosis would show an elevated RI due to reversal of diastolic arterial flow.

Lower extremity arterial stenosis causes characteristic changes to the waveform pattern. While the gray-scale US is useful in detecting plaques and vessel narrowing, doppler US helps categorize the degree of stenosis [27689831]. Within the area of vasculature stenosis, flow velocity increases. PSV best correlates with stenosis severity. In the vessel downstream from the stenotic portion, spectral broadening occurs secondary to flow turbulence. High resistance waveforms may change from typical high-resistance triphasic to low-resistance monophasic waveforms, with tardus et parvus changes. Tardus (the Latin word for slow) and Parvus (the Latin word for weak) defines a late and weakened peak systolic velocity secondary to downstream effects from more proximal stenosis.

A ratio of the peak systolic velocity within and proximal to the stenosis called the PSV ratio may help determine the degree of stenosis. A PSV ratio > 2 correlates to greater than 50% stenosis of the lower extremity artery.[7] Some use a PSV ratio > 3 to indicate stenosis greater than 70%, although this varies amongst radiologists.

Hepatic veins converge upon the inferior vena cava just inferior to the right atrium. Doppler waveforms of hepatic veins are directly related to cardiac motion and function. Pathology such as tricuspid regurgitation and heart failure can be directly correlated to changes within hepatic venous waveforms. In hepatic venous waveforms, reverse or retrograde flow occurs towards the transducer and appears above the baseline. Antegrade flow into the heart is away from the transducer and appears below the baseline.[8]

Peripheral veins are normally low velocity and phasic due to respiratory variation.[9] Valsalva maneuver will cause a reversal of flow within the lower extremity veins. Calculation of the time of flow reversal in venous vessels helps determine venous insufficiency.  For instance, venous reflux lasting > 1 sec in the deep veins, or 0.5 sec at any other level, is clinically significant for venous insufficiency (varicose veins). Squeezing the patient’s calf or having them contract their surrounding lower extremity muscular causes a phenomenon known as augmentation of flow. Lack of augmentation indicates stenosis, usually due to venous thrombosis. Loss of respiratory phasicity indicates proximal stenosis. The deep venous system includes the common femoral, femoral vein, popliteal veins, and its tributaries. The superficial venous system includes the great and small saphenous veins and the medial marginal vein.

Specific contraindications depend upon the exam being performed. In general, an enlarged patient body habitus will decrease sonographic evaluation accuracy due to increased impedance of the sonographic wave. Patient casts, dressings, or overlying surgical material may also limit evaluation. Extremity musculature tremors and movement restrict accurate doppler assessment of venous and arterial structures.

An ultrasound machine capable of both B-Mode (‘B’ standing for 'Brightness') and Doppler should be used to quantify stenosis. The B-Mode US helps in the evaluation of anatomy, including vessel caliber, configuration, and relationship to external structures. Doppler US helps measure blood flow velocity as described above.

Due to the operator dependence of ultrasonography, a licensed vascular sonographer is required.

Preparation depends upon the examination being performed. Regardless of the exam, it is imperative for both the radiologist and technologist to always view prior imaging. In general, any casts, dressings, or overlying material that could potentially interfere with the exam should be removed if possible. If these items cannot be removed, the technologist should relay this information to the interpreting radiologist. It is important for the technologist to introduce himself or herself to the patient. Verification of patient name, date of birth, and institutional specific medical identifiers is required. The technologist should refer specific questions about diagnosis, treatment, and prognosis to the patient’s physician.

Ultrasound protocols and technique depends upon the examination. For extremity arterial studies, one should perform an anatomical assessment from proximal to distal. Both longitudinal and transverse images in B-mode and doppler mode should be obtained. Waveform characteristics such as triphasic, biphasic, monophasic should be noted, along with the corresponding velocities. If an area of stenosis is identified, three sets of velocities should be obtained immediately before, within, and distal to the stenosis.

For extremity venous studies, one should also follow an anatomical assessment of the veins from proximal to distal. Calf veins need not be evaluated for deep venous thrombosis, according to the American College of Radiology, as these vessels have less of a propensity to cause clinically significant thrombosis.[11] In contradistinction to arterial studies, veins should be interrogated with interval compression upon the vein using the transducer to evaluate for thrombosis.[9] Incompressibility should be noted by the technologist. Augmentation of each vein interrogated should also be performed. Phasicity or lack thereof should also be noted.

In particular, vascular ultrasound may lead to several artifacts that complicate the evaluation of the underlying pathology. Artifacts are secondary to both limitations of instrumentations and incorrect instrument settings. Recognition of artifacts helps prevent misdiagnosis.

Aliasing causes a wrap-around defect on the doppler US display. When the blood flow velocity is too high for the selected velocity range, the peak velocity will be cut-off and displayed on the opposite edge of the spectrum. On color doppler, aliasing causes a change from one color to the opposite color, such as blue to red, with no corresponding black stripe to indicate a reversal of flow. Aliasing or ”wrap-around” artifact may be eliminated by increasing the velocity scale.[3] Because stenosis causes increased peak systolic velocities, aliasing may occur in these areas.

If the velocity scale is set too high relative to the speed of blood, areas of low-velocity flow may not be detected. It is important for the technologist always to check the velocity setting, as slow flow areas can be easily misdiagnosed as thrombosis.

Increasing gain on the ultrasound machine makes structures appear more echogenic on grayscale imaging. A high gain may cause a ‘blooming’ phenomenon; this occurs when the color doppler is turned on. The color extends beyond the interrogated anatomy, thereby masking or obscuring the juxtaposed structures. This artifact may obscure partial thrombi and can be eliminated by decreasing color gain.[3] Gain set too low will fail to show a spectral display or color image. The technologist may achieve the correct gain settings by increasing the gain until the noise is seen and then slowly reducing gain until there is a reduction of noise.

Extremity arterial stenosis is a commonly encountered pathology in arterial sonography. Ultrasound characteristics include the following:

Lymphadenopathy is commonly encountered and may be due to either malignant or reactive processes. Several ultrasound factors may favor a malignant lymph node. This most commonly includes the following:

The use of point-of-care ultrasonography has increased in recent years. Studies have shown that a systematic team approach with early ultrasound scanning helps with a timely and accurate patient diagnosis.[12] [Level 3] Because ultrasound is highly operator dependent, appropriate technical training is imperative. A team-based approach must be taken at all times and communication between the technologist and radiologist is critical for an accurate diagnosis. 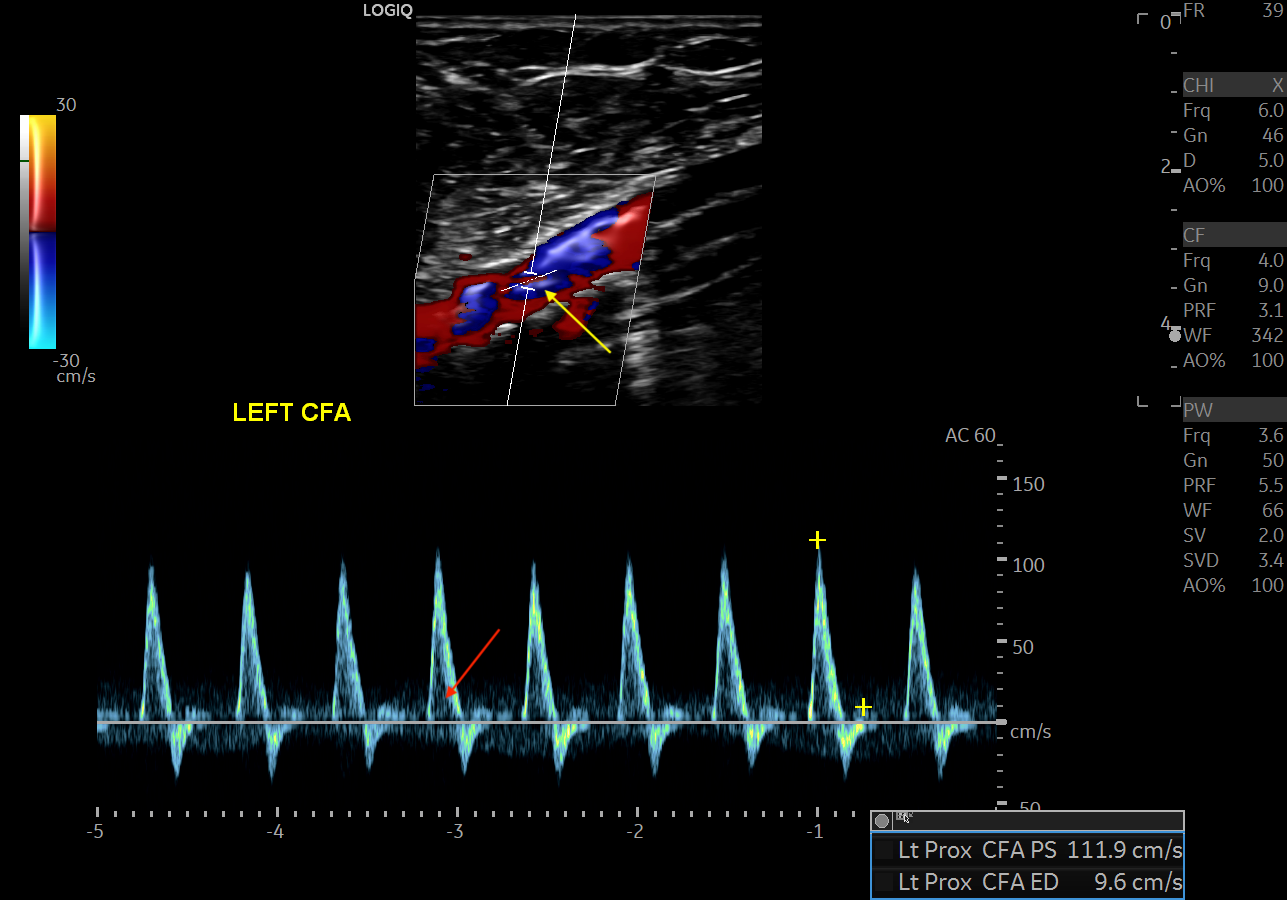 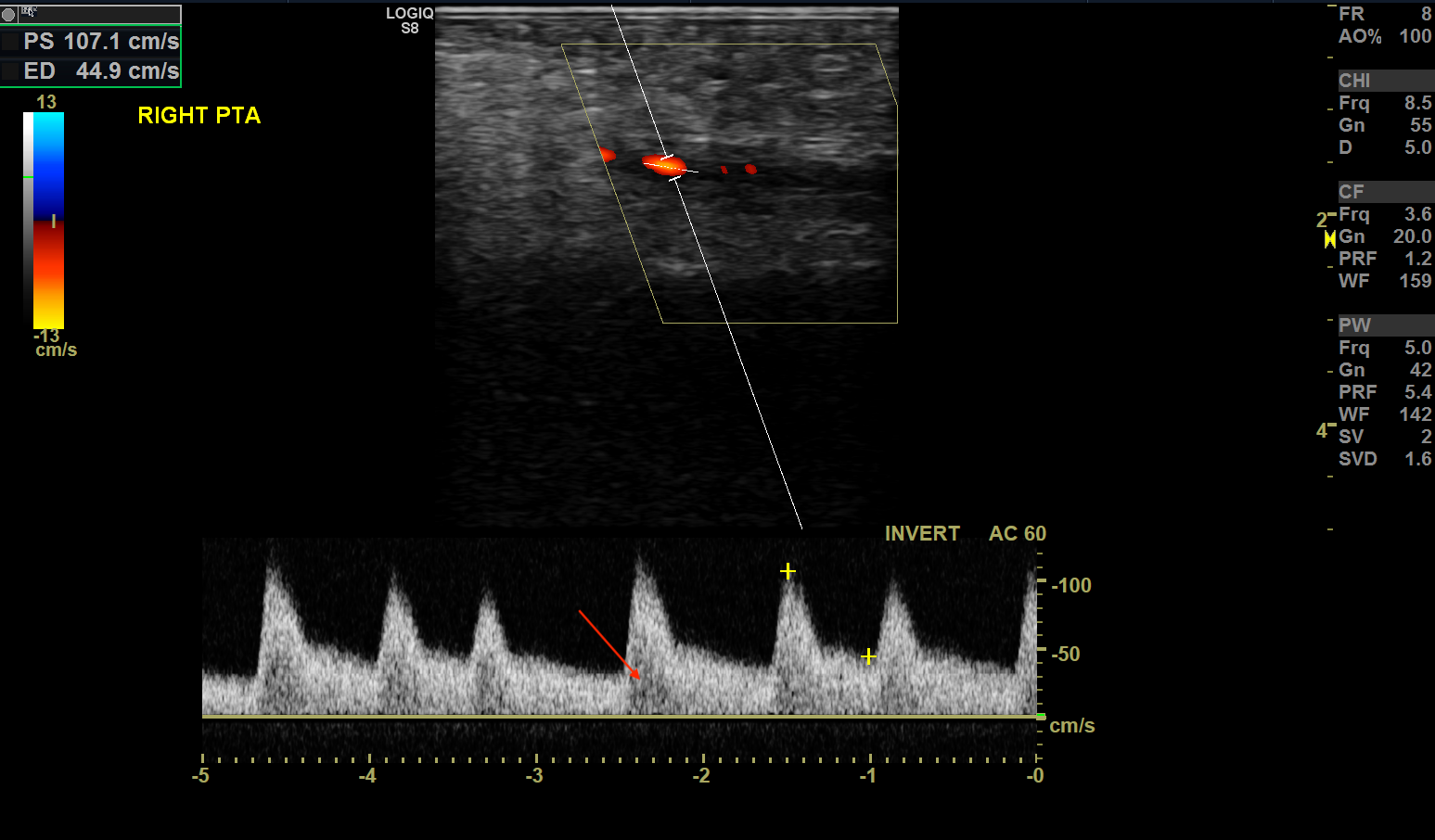 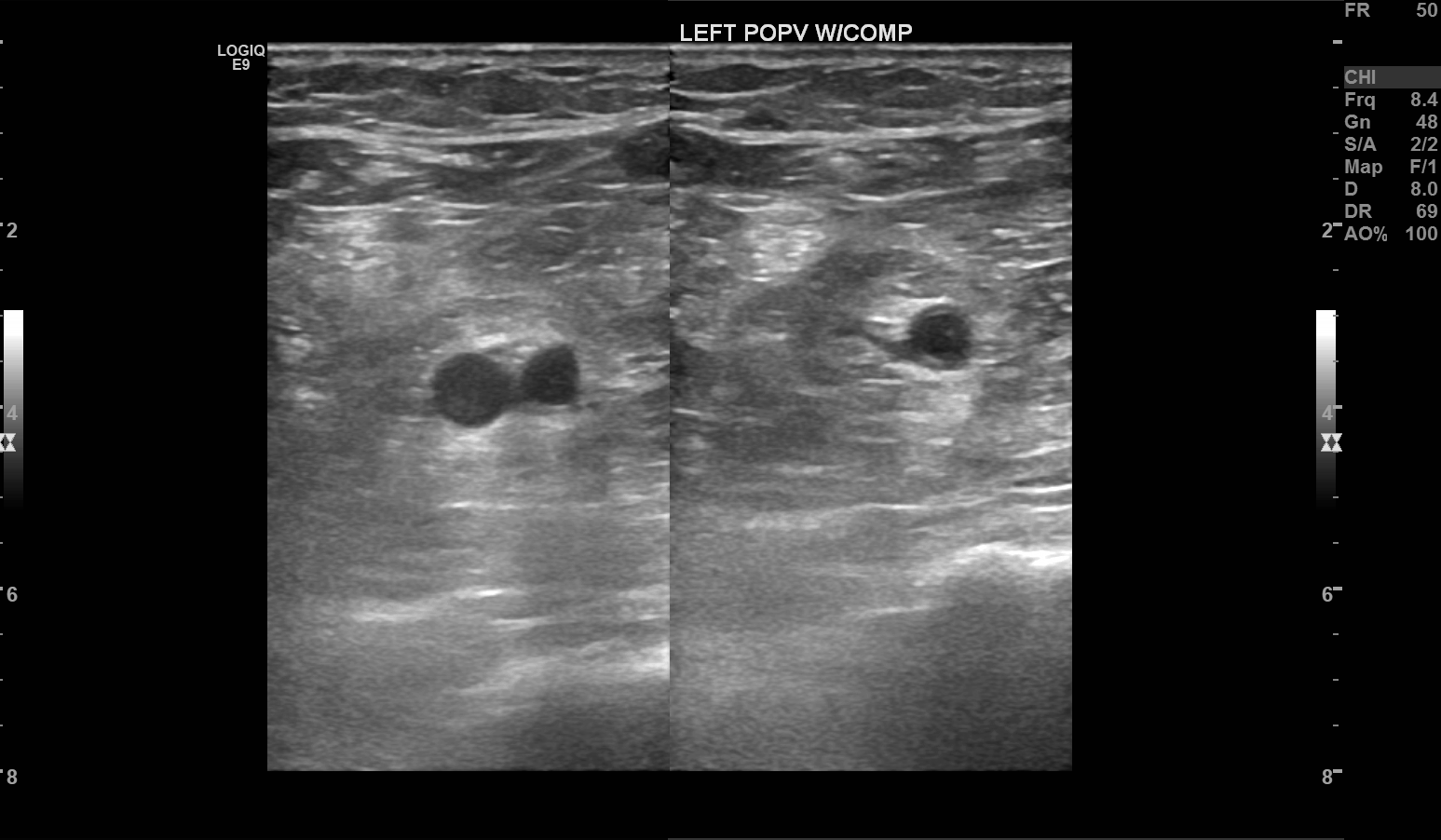 B-Mode doppler showing the left popliteal vein under compression. This compressibility is a normal finding.
Contributed by Brian Covello, MD 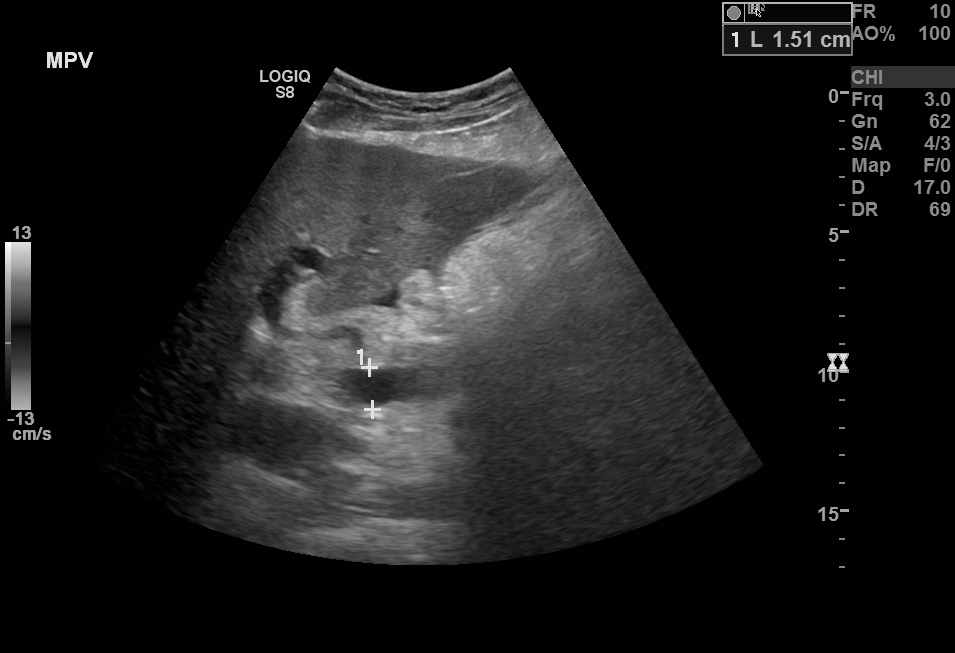 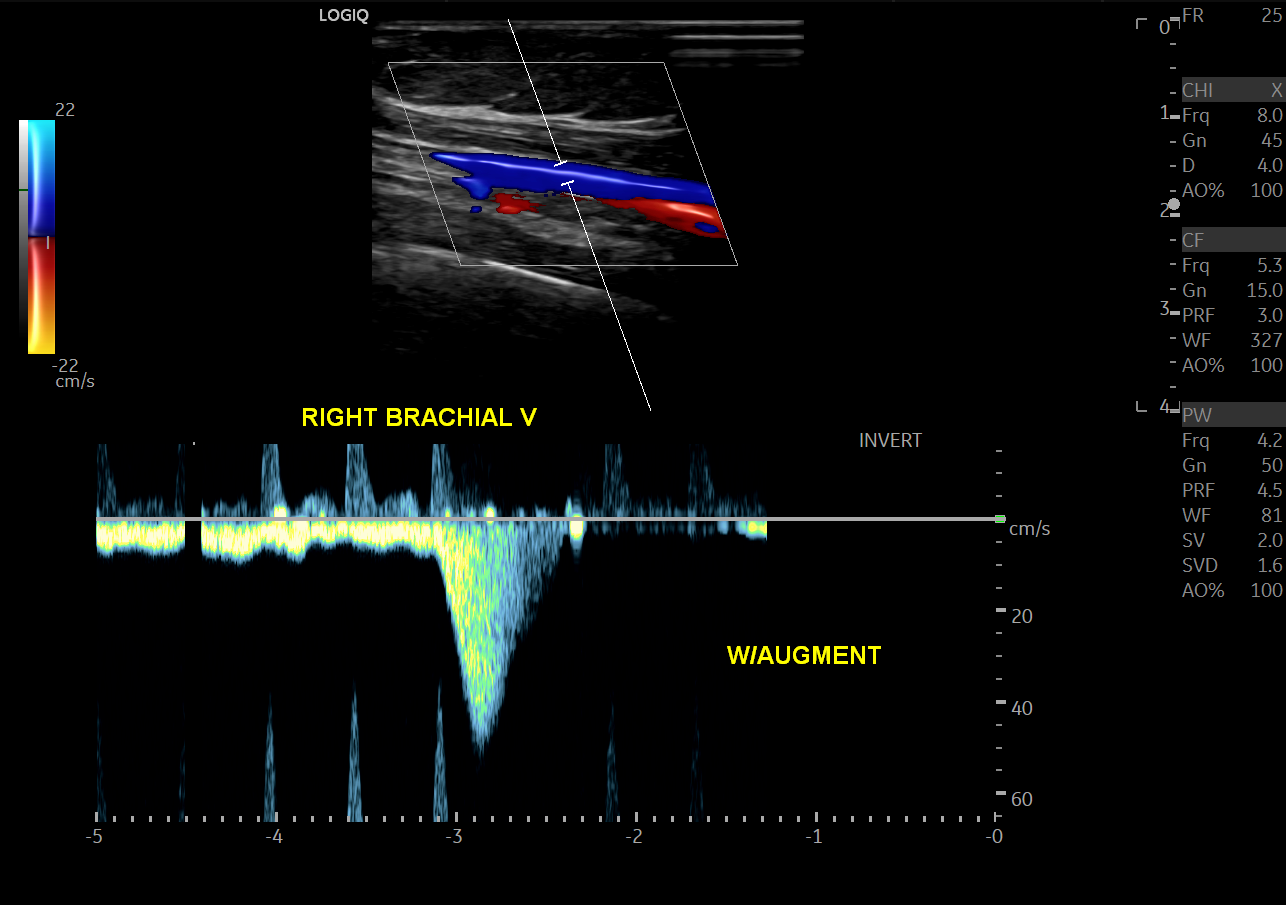 Doppler ultrasound of the right brachial vein that shows aliasing artifact. Note the peak systolic velocity wraps around and is displayed on the opposite edge of the spectrum.
Contributed by Brian Covello, MD