Ultrasound is the first imaging modality of choice for the female pelvis. It allows for real-time, fast, and portable imaging of the uterus, cervix, ovaries, and adnexa without the use of ionizing radiation. Here, we aim to summarize the use of pelvic ultrasonography in the postmenopausal population specifically.

In general, the same principles apply when imaging the postmenopausal pelvis in terms of anatomy.[1] It is important to be aware of ultrasound changes after menopause due to normal hormonal changes.

Excluding pathologies such as fibroids or adenomyosis, the postmenopausal uterus tends to be smaller in overall size (as measured by uterine length, uterine height, and uterine width) compared to the reproductive age uterus. The uterus can continue to decrease in size throughout menopause.[2] Additionally, there is a reduction in the corpus-cervix ratio in postmenopausal women such that it returns to a configuration more similar to that seen in the pediatric or prepubescent uterus.[3] The normal postmenopausal endometrium should be thin and appear atrophic.

Postmenopausal ovaries will also appear smaller and more homogenous, with occasional small hypoechoic follicles on ultrasound compared to those found in reproductive-age women. Because of this, it can be common not to visualize the ovaries on ultrasound in a postmenopausal woman, and this should not lead to concern. Similarly to the uterus, the ovaries can continue to decrease in volume through menopause.[2]

Some of the common indications for a pelvic ultrasound in postmenopausal women include postmenopausal bleeding, pelvic pain, history of ovarian cysts, abdominal bloating, increasing abdominal girth, or pelvic pressure.

The gold standard for diagnosis or exclusion of endometrial cancer would be endometrial sampling via dilation and curettage. In-office endometrial biopsy is also an option but is not as accurate as it is often performed blindly. However, both procedures are invasive, and patients do not always well tolerate in-office endometrial biopsy. Ultrasonography of the pelvis, specifically transvaginal sonography, can be an important screening tool to determine which patients require sampling, either blind or targeted.

Transvaginal ultrasound to evaluate the endometrium can have its limitations. For example, if a patient has a history of uterine fibroids, adenomyosis, obesity, or prior surgeries, it can be difficult to assess the endometrial lining fully. In those cases, endometrial sampling, office hysteroscopy, or saline-infusion sonogram should be performed as the next step in evaluation.

Adnexal masses are another frequent indication for a pelvic ultrasound in postmenopausal females. While most often found incidentally, adnexal masses may be felt on exam or cause symptoms such as pain, pressure, increasing abdominal girth, or fatigue.

Most adnexal masses are benign, but with increasing age, there is an increasing concern for ovarian carcinoma: it is estimated that women over 65 years old are 6 times more likely to receive a diagnosis of ovarian cancer than women under 65 years old.[11] Unfortunately, the presenting symptoms of ovarian carcinoma are vague, usually diagnosed at an advanced stage. Thus, there is great interest in distinguishing benign from malignant adnexal masses. However, due to the relatively low prevalence of ovarian cancer, high prevalence of benign cysts, and poor specificity of ultrasound, routine yearly ultrasonography on all postmenopausal women as a screening tool for ovarian cancer is not indicated.

However, descriptions of adnexal masses on ultrasound can often be subjective. There have been several scoring systems proposed to standardize the sonographic evaluation of adnexal masses. These systems often include overall morphology, ovarian volume, wall thickness, and the presence of internal nodules or papillary excrescences or septations. A review by Myers et al. found that the most frequently used scoring systems had a pooled sensitivity and specificity for detecting malignancy of 82-91% and 68-77%, respectively.[14]

If one or more malignant features are present with no benign features, then the mass is considered malignant. If one or more benign features are present with no malignant features, then the mass can be considered benign. If either of those conditions is not met, then the result is inconclusive.[16] In a meta-analysis, these simple rules were 93% sensitive and 81% specific for detecting malignancy.[17] More recently, the IOTA group has developed the ADNEX (Assessment of Different Neoplasias in the Adnexa) model to more specifically predict whether an adnexal mass is benign, borderline, early stage-malignant, late-stage malignant, or metastatic. This model uses similar ultrasound criteria as the Simple Rules and clinical criteria to calculate risk (see table 2).[15]

The ADNEX model was found to have either comparable or superior sensitivity and specificity to both the Simple Rules and other existing scoring systems in external validation studies. At malignancy risk cutoffs of 1%, 10%, and 30%, sensitivities approach 100%, 97% and 86%, respectively. Similarly, at malignancy risk cutoffs of 1%, 10%, and 30%, near 12%, 75%, and 89%, respectively.[18][19][18] Thus, the IOTA Simple Rules and ADNEX model are promising methods for standardizing the sonographic evaluation of adnexal masses in postmenopausal patients. However, these algorithms are not yet widely implemented within the United States, partly because they were validated in Europe. Proponents of the IOTA algorithms are hopeful that their use may become more widespread in the United States and improve patients' triage and treatment with adnexal masses.

Nonstandard descriptions of adnexal masses notwithstanding, there can be other challenges with evaluating the postmenopausal adnexa by ultrasound. As mentioned before, postmenopausal ovaries are atrophic and may be difficult to visualize. Additionally, other structures within the pelvis, such as the bowel, fallopian tubes, and peritoneal cysts, may mimic the ovaries on imaging.

An ultrasound machine along with transabdominal and/or transvaginal ultrasound probes are needed.

A sonographer or physician may perform an ultrasound. Often it is a physician, either specializing in obstetrics and gynecology or radiology, who interprets the images.

To better visualize the reproductive organs, a full bladder is preferred for a transabdominal scan compared to an empty bladder for a transvaginal scan.

While evaluating the female pelvis, it is customary to perform both transabdominal and transvaginal imaging.

Transabdominal imaging of the postmenopausal pelvis is usually of limited utility due to the normal atrophic changes of the reproductive organs. However, it may be helpful in patients that have an especially enlarged uterus or large pelvic masses due to a broader field of view compared to transvaginal imaging. It is also helpful in patients who are unable or unwilling to tolerate a transvaginal ultrasound. Transabdominal imaging is typically performed with a full bladder using 2.5 to 5 MHz transducers.

A transvaginal approach is the technique of choice when performing an ultrasound on a postmenopausal patient due to its high-resolution images. A transvaginal scan is performed after emptying the bladder using a higher frequency transducer (5-8 MHz).

These transabdominal and transvaginal imaging modalities are also useful in evaluating adnexal masses by identifying the origin, physical characteristics like size, contents like solid or cystic, septations, laterality, presence of papillary excrescences, presence or absence of free fluid in the pelvis. Apart from identifying the gynecological causes for adnexal masses, ultrasound can also be used to identify other non-gynecological causes for adnexal masses like appendicitis or appendicular abscess or pelvic kidney or peritoneal inclusion cysts.

Doppler ultrasound, with which blood flow through vessels can be evaluated, is another technique that may be applied when imaging a postmenopausal patient. Doppler can be helpful in the differentiation of a benign from a malignant adnexal mass.[20]

As noted above, pelvic ultrasound in the postmenopausal patient is key in evaluating postmenopausal bleeding and adnexal masses. Thus, these imaging studies can be key in the early detection of endometrial or ovarian cysts and lead to improved outcomes in patients.

With open communication and collaboration between the healthcare team members (including clinicians, mid-level practitioners, specialists, and nurses), a properly performed and interpreted pelvic ultrasound in the postmenopausal woman can have important diagnostic consequences and lead to improved outcomes in patients. 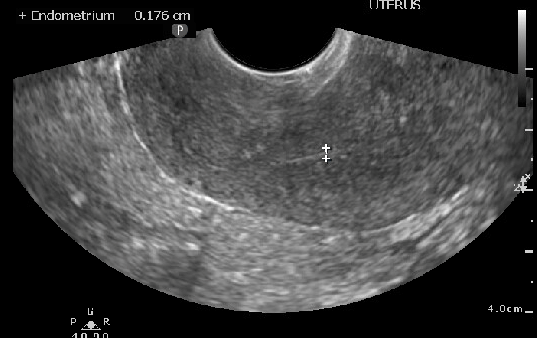 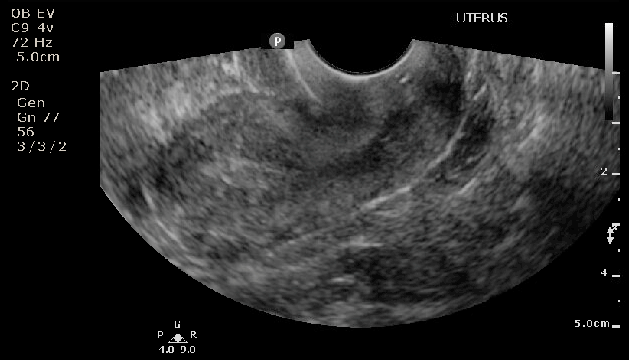 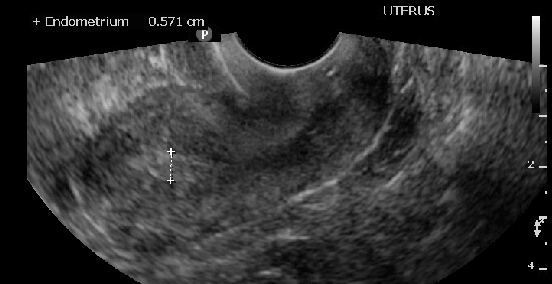 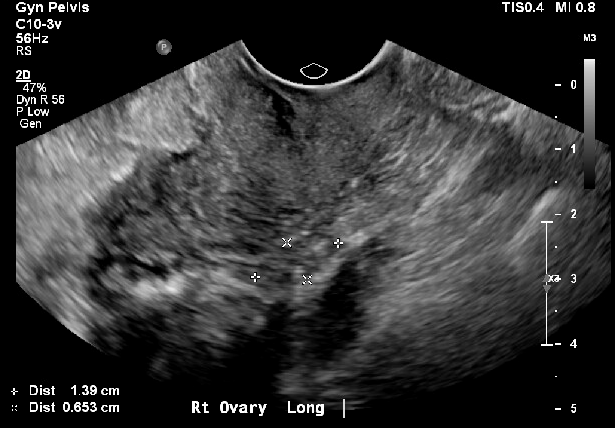 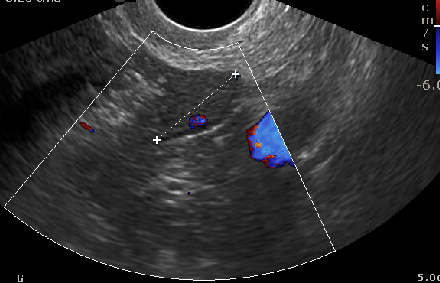 Postmenopausal ovary with no follicles
Contributed by Laveena Kondagari, MD

ACOG Committee Opinion No. 734: The Role of Transvaginal Ultrasonography in Evaluating the Endometrium of Women With Postmenopausal Bleeding. Obstetrics and gynecology. 2018 May;     [PubMed PMID: 29683909]

Smith-Bindman R,Weiss E,Feldstein V, How thick is too thick? When endometrial thickness should prompt biopsy in postmenopausal women without vaginal bleeding. Ultrasound in obstetrics     [PubMed PMID: 15386607]

Granberg S,Wikland M,Jansson I, Macroscopic characterization of ovarian tumors and the relation to the histological diagnosis: criteria to be used for ultrasound evaluation. Gynecologic oncology. 1989 Nov;     [PubMed PMID: 2680797]