Transcranial doppler is utilized to investigate the intracranial vasculature for various purposes. It offers a non-invasive, radiation-free way to monitor for sequelae from subarachnoid hemorrhage or to help determine stroke risk in sickle cell patients. This activity reviews a few examples of transcranial Doppler exam indications, basic techniques, and the importance these findings have in clinical care by the interprofessional team.

Transcranial Doppler (TCD) is a non-invasive ultrasound technique, not utilizing ionizing radiation. This technique takes advantage of acoustic windows present in the skull to interrogate the intracranial vascular structures. Various vascular measurements can be determined, including cerebral blood flow velocity, which can affect many different pathologies. Common indications for TCD include screening for vasospasm in patients with subarachnoid hemorrhage, screening for signs of angiopathy in pediatric sickle cell disease patients, and evaluation for a right-to-left shunt in the setting of stroke and suspected paradoxical embolism (patent foramen ovale and other pathologies).[1] This article will focus on these common indications.

The intracranial arteries are supplied by the vertebral and the bilateral internal carotid arteries. These extracranial vessels supply the Circle of Willis, named after Thomas Willis, an English physician. The Circle of Willis is an anastomotic ring of vessels that supply the brain. The anterior circulation is largely provided by the ICAs, which branch intracranially into the middle cerebral and anterior cerebral arteries. The posterior circulation is supplied by the vertebral arteries, which join to form the basilar artery. The basilar artery gives off distinct branches, including the anterior inferior cerebellar artery (AICA), pontine perforating arteries, and the superior cerebellar arteries. The basilar artery then bifurcates into the bilateral posterior cerebral arteries. The circle is completed via connections of the distal ICAs to the PCAs via the posterior communicating arteries, and the bilateral ACAs are connected via the anterior communicating artery.[2] There are numerous variations to this classic anatomy, many of which cause an incomplete circle. Segmental hypoplasia or aplasia is common, with a complete circle of Willis observed in less than 20% of the population.[3]

The internal carotid artery can be broken down into multiple segments, typically C1-C7 based on a classification system by Bouthillier et al. While there is no universally accepted naming system of the carotid segments, the one by Bouthillier is the most commonly used.[4] The ICA originates at the common carotid artery's bifurcation as it splits into the external carotid and internal carotid arteries. This travels superiorly to the carotid canal of the petrous bone and bifurcates intracranially as the MCA and ACA vessels. The C1 segment is considered the cervical segment, extending from the ICA origin to the carotid canal. Often, the intracranial portion of the ICA is referred to as the carotid siphon. This terminology is based on angiographic studies by Moniz in 1927. Still, it roughly correlates with the C2 (Petrous), C3 (Lacerum), C4 (Cavernous), and C5 (Clinoid) segments based on the modern classification system as the artery makes multiple bends through the petrous bone.[5] The final carotid segments are C6 (Ophthalmic) and C7 (Communicating).[6]

While the cause of vasospasm is not definitely identified, one potential cause is decreased production and decreased response of the artery to the vasodilator, nitric oxide. After a subarachnoid hemorrhage, the incidence of vasospasm usually occurs between days 4 and 14. Detection of vasospasm is important in a subarachnoid hemorrhage patient because of its association with delayed cerebral ischemia. Traditionally, vasospasm has been treated with "Triple H" therapy which included hypertension, hypervolemia, and hemodilution. However, this is no longer the mainstay treatment for vasospasm, with multiple newer treatments, including hypertension in a euvolemic patient, among others. Delayed cerebral ischemia is important to identify and treat, contributing to the high morbidity and mortality of subarachnoid hemorrhage patients.[7]

When there is a decrease in the diameter of a segment of a vessel (as in vasospasm), there is an associated increase in velocity and decrease in pressure. This is based on Bernoulli's principle and is because the same volume of blood is trying to cross this narrowed vessel. To do this, the velocity increases. This fact is irrespective of the cause of the narrowing, be it from vasospasm, atherosclerotic disease, or other causes. This focal elevation in the velocity is the primary abnormality of interest in the interpretation of transcranial Doppler exams.[8] One potential pitfall in TCD examination is elevated velocity secondary to hyperdynamic states, such as in classic triple H therapy. To help with this pitfall, the Lindegaard ratio can be used to determine true vasospasm (discussed later).

Transcranial Doppler can be utilized for many different indications. There are, however, three main/common indications for using TCD, including monitoring for evidence of vasospasm after subarachnoid hemorrhage, evaluation for a right-to-left shunt in the setting of embolic stroke, and screening of pediatric patients with sickle cell disease at high risk for stroke.[9][10] There are many other potential uses for TCD including, but not limited to: estimating intracranial pressure, brain death, ICA occlusion, monitoring after neurosurgical procedures, and cerebral autoregulation testing.[11][8]

There are few contraindications for TCD examination. Some would include lack of sonographic window for evaluation and inability of the patient to remain still during the examination.

A sonographer or physician trained in transcranial Doppler techniques is required.

No specific patient preparation is required for a general TCD examination. For specific applications, there may be some additional preparation required. For example, the evaluation of right-to-left shunt utilizes a contrast examination. This requires the patient to have an IV line started (typically in an antecubital vein) attached to tubing with a three-way stopcock. Additionally, for this exam preparation, agitated saline will be needed.[13]

Doppler ultrasonography is based on a physics principle called the Doppler effect, first described in the mid-1800s by Christian Doppler. It describes how a sound wave frequency changes when it hits a moving object; in this case, a red blood cell is contained within a vessel. The ultrasound probe emits a soundwave with a known frequency; as this travels into the tissue and hits a moving red blood cell, the frequency changes as it reflects back to the probe. Based on this, the computer can determine the direction relative to the probe and the velocity of the moving red blood cell. Velocity measurements are also dependent upon the Doppler angle (theta). This is the angle between the direction of insonation and the direction of blood flow. For general vascular ultrasound, this angle should be less than 60 degrees.[8]

Transcranial Doppler ultrasound utilizes various principles to allow interrogation of intracranial vessels for various uses. Firstly, a low-frequency ultrasound probe is utilized (2-3 MHz) due to improved penetration through structures with low-frequency sound waves, in the case of TCD, the cranial bones. Classically, the power M-mode is utilized for common indications (although color Doppler can also be used). During insonation of the cranium identifying the vessels is dependent upon a few variables and knowledge of normal intracranial vascular anatomy. Identification is based on (1) Which Doppler window is being utilized, (2) the direction of flow relative to probe position, (3) the depth of the target vessel, and (4) the Doppler spectra.[14][15]

Insonation windows with depth and direction of flow for vessel identification:[15]

Before starting the procedure, an IV line should be started in one of the antecubital veins with a 3-way stopcock attached to tubing. Utilizing a head strap, bilateral TCD probes are used to insonate the MCA vessels utilizing the transtemporal windows. Once the bilateral MCAs are selected, agitated saline is prepared using 9mL saline and 1mL of air. One bolus is given, and the MCAs are monitored for microemboli ("hits" of noise related to echogenic microbubbles shunted to systemic circulation). Then, after a 5-minute delay, another bolus is given with the addition of having the patient perform a Valsalva maneuver (potentially worsening shunting) after the full bolus is given.[13]

TCD is used as a screening tool to determine stroke risk in pediatric patients with sickle cell disease. This screening method is based on the STOP trial, which used the time-averaged mean velocity of the MCA and distal ICA as parameters to determine the stroke risk. The time-averaged mean velocity (TAMV) is utilized for pulsatile flow and essentially measures the mean velocity over multiple heartbeats. For these studies, the highest TAMV of either the MCA or ICA is used to determine risk. Normal is considered <170 cm/s, conditional is assigned to TAMV of 170-199 cm/s and abnormal is considered >/= 200 cm/s.[16]

There are no specific complications associated with TCD. When using the transorbital approach, care should be taken to avoid excess probe pressure.

TCD allows for non-invasive interrogation of intracranial structures such as the vasculature. Since this technique is based on ultrasound imaging, it is non-ionizing and can be performed portably; therefore, it is a good option for ICU patients who need repeat testing, may be difficult to move, and clinical neurologic examination may be limited. In the setting of subarachnoid hemorrhage, daily TCD testing can be performed to monitor for signs of vasospasm.  This allows for prompt identification and treatment of vasospasm to prevent delayed cerebral ischemia.[11] Daily surveillance is often performed during the first two weeks following hemorrhage, including the time of peak vasospasm incidence. Detection of abnormalities with noninvasive testing may prompt subsequent invasive treatment, such as intra-arterial calcium channel blocker administration.[17]

Based on the American Society of Hematology 2020 guidelines for sickle cell disease, TCD is recommended as an annual screening exam for children with HbSS.[18] They also recommend regular blood transfusion for at least a year in patients with abnormal velocities (when feasible) to reduce stroke risk. One study found that before TCD, the incidence of overt stroke in children with SCD was 0.67 per 100 patient-years. After TCD was introduced, this was reduced to 0.06 per 100 patient-years.[19]

Transcranial Doppler is a technique that can be used in various ways for various indications. An important part of this is the technologist performing the exam. They are critical to deriving the benefit from this exam because if it is not performed properly and to the highest standard, patient outcomes will not be optimal. Clear and open communication between the technologist and the physician is also paramount for clear, precise, and effective results. To further improve patient outcomes, the technologist must understand critical results so the physician can be notified promptly and minimize delay in care. 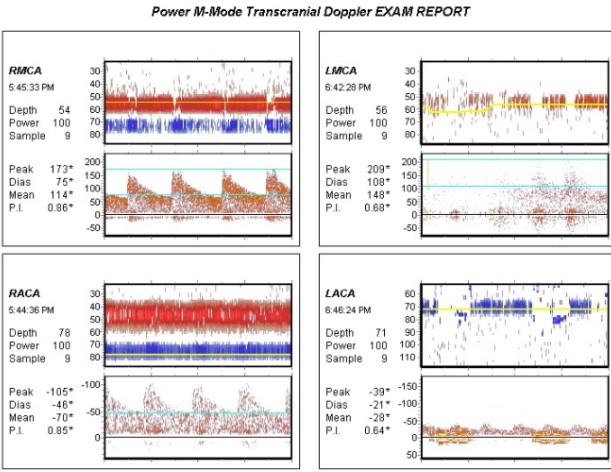 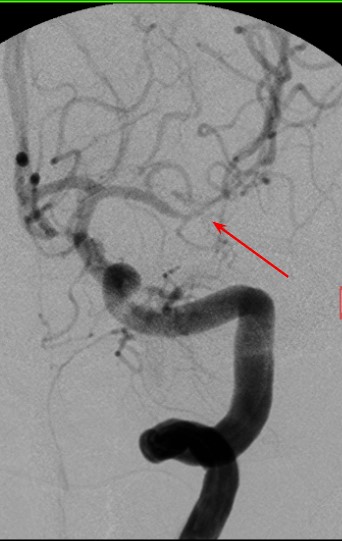