The sacrum contributes to several musculoskeletal and visceral health conditions. The spinal segment plays a primary role in the transmission of weight throughout the gait cycle, sitting, and standing.[1][2] It also houses the sacral nerves, which provide autonomic innervation to many of the lower abdominal and pelvic organs. It has long been a belief that the autonomic activity of the sacral nerves is parasympathetic; however, more recent studies suggest that the nerves may have sympathetic activity.[3]

It is possible that the sacral nerves are more complex and cannot be simplified as transmitting parasympathetic or sympathetic activity alone.[4] Regardless, the nerves exiting the sacrum have significant contributions to the autonomic nervous system, influencing the function of the gastrointestinal, urinary, and reproductive systems. The sacrum is an often overlooked structure in evaluating patients with autonomic dysfunctions and/or low back pain.[1]

The sacrum is a large triangular bone made up of five separate vertebrae, which fuse during childhood and early adulthood.[5] The sacrum articulates with four different bones: the five lumbar vertebrae (with a disc space and a facet joint), the coccyx below (a symphysis with a thin fibro-cartilaginous disc), and the ilia on either side via the sacroiliac joints.  The sacroiliac joints are made up of a synovial joint anteriorly and strong ligamentous attachments posteriorly.[5] The sacroiliac complex has a significant amount of mobility, and restrictions in its mobility (termed somatic dysfunctions) are readily palpable.[6]

Nerves from the S2-S4 spinal levels leave the spinal canal via the ventral rami of the sacrum. The nerve roots form pelvic splenic nerves, which serve to innervate the lower gastrointestinal tract, urinary tract, and sexual organs.[7] Thus, somatic dysfunctions of the sacrum have the potential to impede proper innervation of these organs. Articulatory techniques (ART) make up one category of techniques that have been shown effective in treating the sacral somatic dysfunctions.  These techniques are low-velocity and low-amplitude; they include a passive, direct force from the physician through a restrictive barrier.[8]

ART is often performed repetitively to free all ranges of motion of a joint. The articulatory technique described here, sacral rocking, accentuates the physiologic respiratory motion of the sacrum. During exhalation, the base (superior portion) of the sacrum moves posteriorly, termed counternutation/extension. In contrast, during inhalation, the sacrum nutates/flexes as the sacral base moves anteriorly. By accentuating the natural motion of the sacrum with respiration, sacral rocking can restore physiological freedom of motion in each of the sacrum’s four articulations, without putting excessive stress on ligaments and surrounding structures.

The indications for sacral ART, or sacral rocking, include somatic dysfunction of the sacrum.  Sacral ART is one of many techniques that can help to treat somatic dysfunction of the sacrum.[9] Sacral rocking is often a preferred modality when patients present with pelvic symptoms relating to the visceral organs, such as constipation and dysmenorrhea.[10] Sacral rocking requires minimal patient participation; however, the patient must be able to lie prone for several minutes.

This technique can have other goals. For example, improve the relationship between the base of the sacrum and L5, and consequently, positively influence craniosacral mobility.

The sacroiliac joint is innervated and can give painful symptoms; this approach could improve the articular relationship of these joints and reduce nociceptive afference.

Other indications are related to soft tissues. The sacral area is covered by the thoracolumbar fascia, which is known to be a source of pain because if there is a tension dysfunction, the receptors can turn into nociceptors. The technique described could alleviate fascial tensions and improve the symptomatic picture.

The technique can mitigate the fascial tensions of the endopelvic fascia, the sacrospinous and sacrotuberous ligaments, the urogenital diaphragm or triangular ligament, the long dorsal sacroiliac ligament.

OMT is generally safe; however, there are still risks involved. Sacral rocking should not be done if it produces pain. Other contraindications for sacral rocking include vertebral malignancy near the sacrum, infection or inflammation, cauda equina syndrome, vertebral bone disease, and bony joint instability.

An osteopathic manipulative treatment (OMT) table is the only piece of equipment necessary for this technique. If no OMT table is present, this technique could be performed on any medical exam table.

The clinician is the only person needed to perform sacral rocking. Since the procedure involves palpating a sensitive area, the patient should have an offer for a chaperone such as a medical assistant or nurse.

Sacral rocking is a very safe technique. As with any osteopathic manipulative treatment, physicians should warn their patients of potential mild soreness the following day.

Osteopathic manipulative treatment is a useful tool in correcting somatic dysfunctions to optimize the biomechanics of the sacrum as well as improve the autonomic outflow from the sacral nerves. OMT is a safe, effective, and efficient treatment option for patients with sacral dysfunctions.[9] Specifically, sacral rocking is a gentle articulatory technique that accentuates the sacrum’s normal physiologic respiratory motion; it can be useful in correcting any respiratory restrictions of the sacrum.[10]

From a neurological point of view, the diaphragm muscle connects to the tongue and pelvic floor. Dysfunction of these anatomical areas could create further dysfunctions, not only at the level of the symptom. It would be more appropriate, after finishing the articulatory technique on the sacral bone, to also check the districts such as tongue and diaphragm muscle; if the most important dysfunction is the sacral area, the other districts should improve independently.

Working the sacral area has an autonomic systemic aspect, as the anatomical area is rich in sympathetic and parasympathetic pathways; balancing a somatic sacral tension, could help rebalance the vegetative neurological function.

It is possible to work on the sacral bone to resolve or relieve cranial symptoms when it is not possible to place the hands on the area of the dysfunctioning skull.

The osteopathic physician is primarily involved in diagnosing and treating somatic dysfunctions. Others in the healthcare team need to be aware of somatic dysfunctions as a common etiology of low back pain. Primary care physicians and pain management physicians alike should be educated to refer their patients to receive adjunctive OMT when indicated; this can reduce unnecessary medications and surgical procedures. Surgeons should also be aware of OMT as an adjunct to physical therapy to aid in recovery postoperatively. 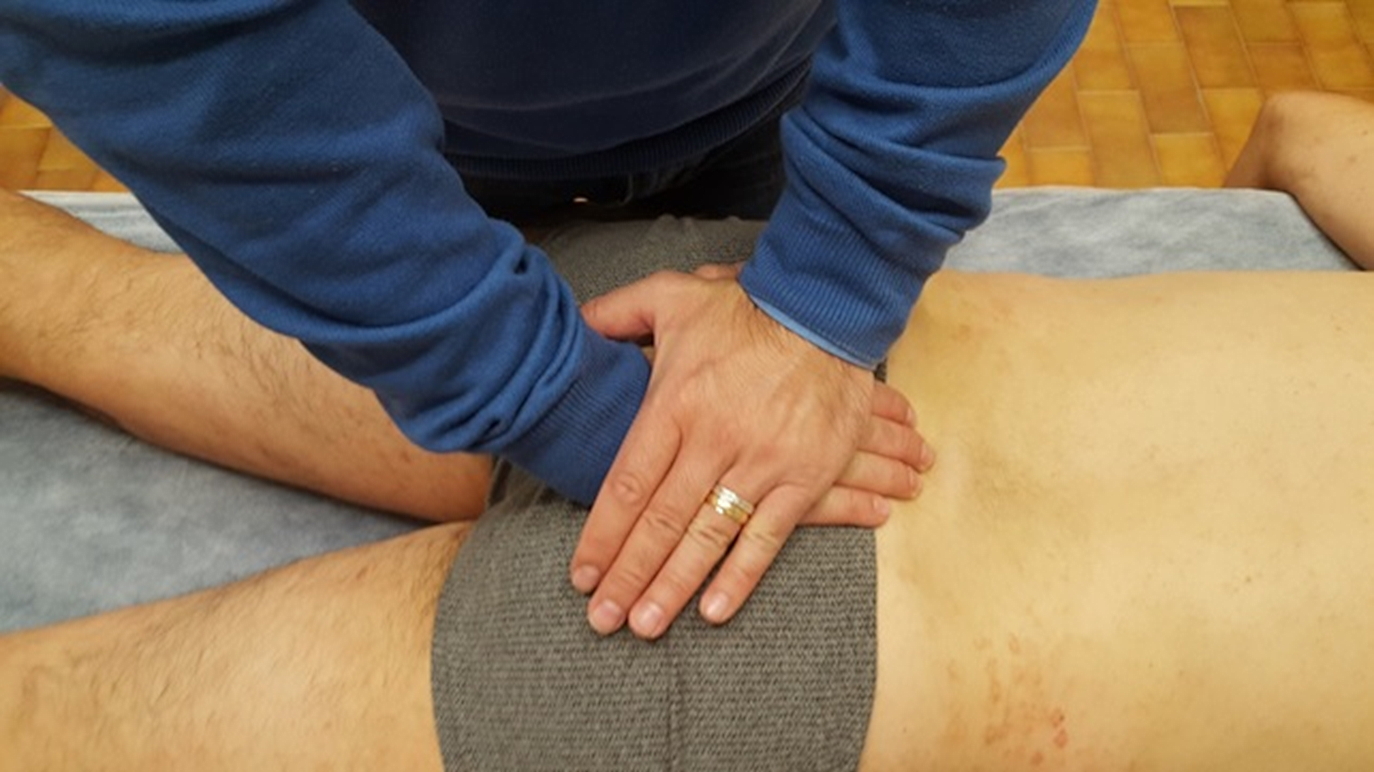 The osteopathic technique shows sacral rocking; the hand below listens, while the hand above directs the movement. The push of the hands (pressure on the sacral bone) is given by the weight of your body and not by the strength of the arms. The operator's body rocks together with the sacral bone
Contributed by Bruno Bordoni, PhD.

Kwon Y,Kim JW,Heo JH,Jeon HM,Choi EB,Eom GM, The effect of sitting posture on the loads at cervico-thoracic and lumbosacral joints. Technology and health care : official journal of the European Society for Engineering and Medicine. 2018;     [PubMed PMID: 29758964]

Van Buskirk RL, A manipulative technique of Andrew Taylor Still as reported by Charles Hazzard, DO, in 1905. The Journal of the American Osteopathic Association. 1996 Oct;     [PubMed PMID: 8936927]